Not so much from President Joe Biden’s (D) words or his Vice President and co-President Kamala Harris’ (D) careful silence, as much as what’s left in and left out of the current iteration of his reconciliation bill.

What’s still in after its seeming paring from $3.5 trillion to $1.75 trillion (don’t believe those numbers or that any numbers are anywhere near close to finality or even accuracy, but take them at value for now): climate change initiatives.

This is a preview of A Window on Biden-Harris Priorities. Read the full post (341 words, estimated 1:22 mins reading time)

Senator Tom Carper (D, DE) is on the hot seat (pun intended) this time. Despite current rising inflation and resulting higher prices for everything energy-related (like transportation fuel, home and office heating and cooling, food), he’s demanding continued and increased Federal spending, in particular, the Progressive-Democrats’ spend-a-thon reconciliation bill—inflation be damned. Because climate.

Our planet is on fire….

On fire. If we’re on fire today, what was the state of our planet in past ages when it was so much warmer than it is today, and life was lush?

This is a preview of Lies of Progressive-Democrats—More. Read the full post (297 words, estimated 1:11 mins reading time)

Like the man said, you can’t make this stuff up.

This is a preview of The Green-Eyed Monster of Hypocrisy. Read the full post (129 words, estimated 31 secs reading time)

Calling climate change a systemic risk to the financial system, the White House will release a report Friday outlining its strategy for new rules that could affect investment disclosures, insurance policies and home loans.

[T]he US needs “a road map for measuring, disclosing, managing, and mitigating climate-related financial risk across the economy.”

This is a preview of Intrusive Government. Read the full post (340 words, estimated 1:22 mins reading time)

[L]ife is always full of tough choices and the relationship between nations. That was John Kerry answering David Westin, a Bloomberg Television anchor, who asked Kerry, “What is the process by which one trades off climate against human rights?” Kerry actually said that in all seriousness regarding the Biden-Harris administration’s prioritizing global warming over the People’s Republic of China’s genocide against Uyghurs.

Never mind that the Uyghurs are being murdered today, and even if Climatistas are right, nobody dies for generations under the warming.

That’s John Kerry’s claim and goal as he stated at the recent, pretentiously styled, Leaders Summit on Climate.

Net zero is not enough. We need to remove CO2 from the atmosphere.

There are two interpretations for Kerry’s claim.

One is that he meant complete removal, which would have the effect of starving to extinction all plant life, and from that all life on Earth.

The other interpretation is that he meant removal of “excess” CO2 from the atmosphere. He—and climatistas everywhere—decline to define “excess” in any concrete, measurable terms.

This is a preview of “Remove CO2 from Atmosphere”. Read the full post (174 words, estimated 42 secs reading time)

The headline of a Wall Street Journal piece regarding the Amazon forest, its putative role in Earth’s climate, and Brazil says it all: Brazil’s Climate Overture to Biden: Pay Us Not to Raze Amazon. The article’s lede lays it out in crystalline terms.

Brazil’s government, widely criticized by environmental groups as a negligent steward of the Amazon rainforest, has made an audacious offer to the Biden administration: provide $1 billion and President Jair Bolsonaro’s administration will reduce deforestation by 40%.

The article closed with a question for readers:

Should the US give the Bolsonaro government in Brazil $1 billion to slow deforestation in the Amazon?

This is a preview of A Brazilian Extortion Move. Read the full post (294 words, estimated 1:11 mins reading time)

President Joe Biden’s Climate MFWIC, John Kerry, traveled to Iceland to accept an Arctic Circle award for his climate “leadership.” Of course, Kerry traveled by flying in his private jet (which has a much larger per-passenger carbon footprint than a commercial jet, but we won’t mention that).

An Icelandic journalist, Jóhann Bjarni Kolbeinsson, asked him how that works. Kerry said,

If you offset your carbon—it’s the only choice for somebody like me who is traveling the world to win this battle.
I negotiated the Paris Accords for the United States.
I’ve been involved with this fight for years. I negotiated with President Xi to bring President Xi to the table so we could get Paris.

This is a preview of People Like Me. Read the full post (278 words, estimated 1:07 mins reading time)

From Watts Up With That, some data for the continental United States over the last 100 years, in graph form.  Here’s the lead graph. 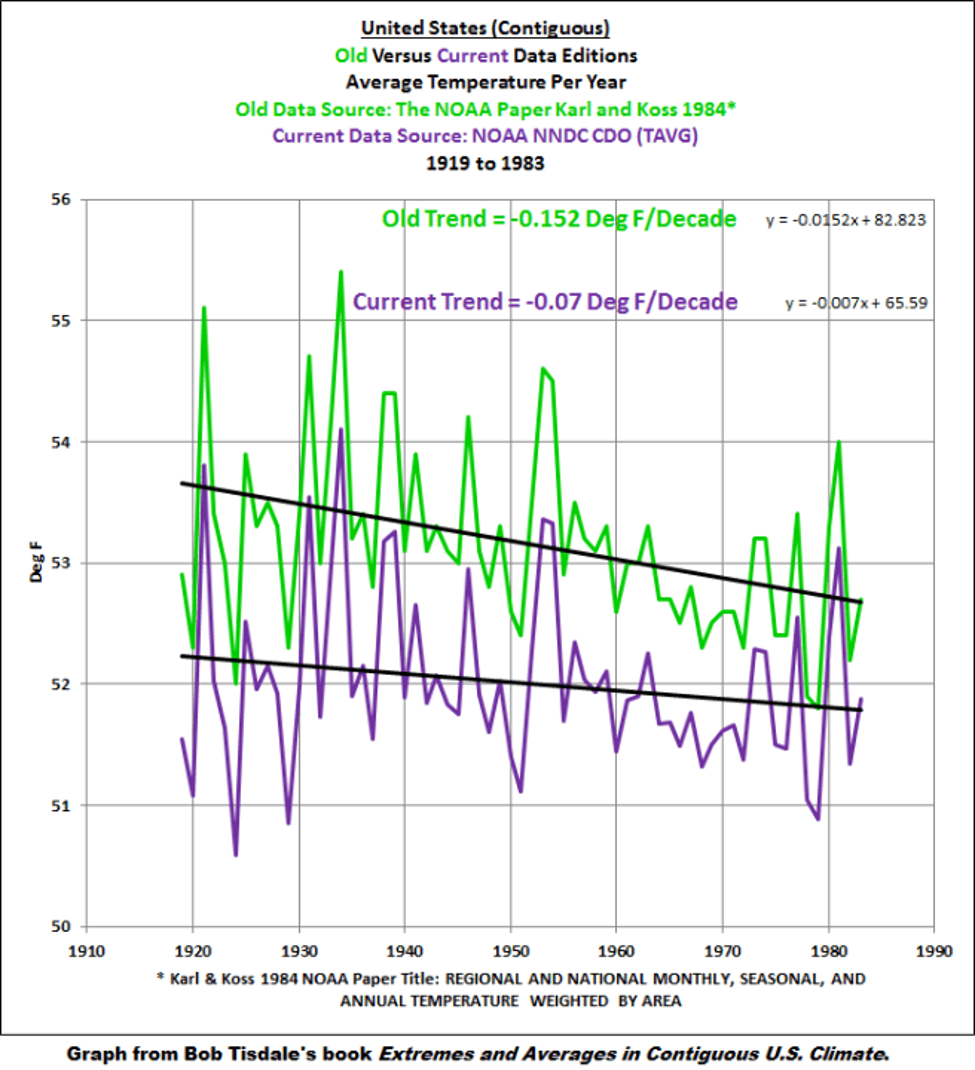 Cooling? Say, what? Notice the year-on-year variability, too. Sort of puts the “warming” since the mid- to late-80s in perspective.

Other data are similar in vein: precipitation data—flat; drought severity, when we have one—slightly rising.

Readers here have known of my long-standing disdain for climatistas’ climate modeling skills: their models cannot simultaneously predict our past and our present, and their predictions of our future have wildly exaggerated for the last 20 years, and counting.  NASA (yes, an agency that has been caught altering past temperature data to “true up” current temperature change) also has commented on the matter.

Working from cloud modeling and clouds’ effect on climate change, NASA noted that [emphasis in the article]

This is a preview of Climate Modeling. Read the full post (235 words, estimated 56 secs reading time)