New York Democratic Jamaal Bowman was arrested Thursday alongside more than two-dozen other protesters at the U.S. Capitol as they demanded the Senate alter its 60-vote legislative filibuster pass key tenets of the lawmaker’s political party.
A Bowman spokesperson said the first-term congressman took part in a “voting rights non-violent direct action at the North Barricade of the US Capitol Building and was arrested by the US Capitol Police.”

Got his arrest record, now. He can put a star on his calendar and his arrest Certificate of Achievement on his hero wall in his office.

This is a preview of Virtue-Signal Success. Read the full post (168 words, estimated 40 secs reading time)

Or one not taking the other seriously. The disconnect between President Joe Biden-Kamala Harris and Russian President Vladimir Putin—or the fact that Putin doesn’t take the Biden-Harris administration seriously—doesn’t get much more clearly demonstrated than by this lead image from a Friday Wall Street Journal article about continuing US-Russia “negotiations” regarding Ukraine. 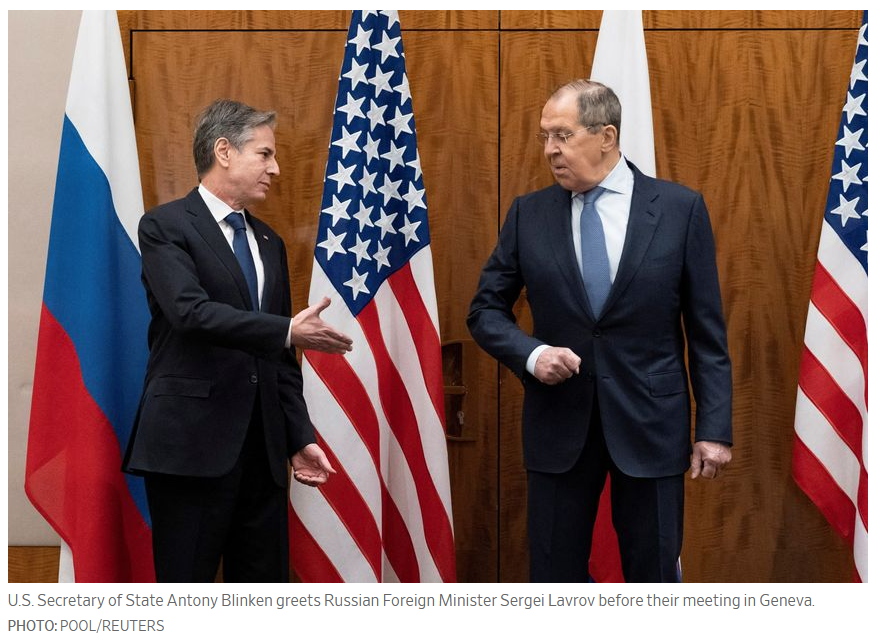 This is a preview of Talking Past Each Other. Read the full post (110 words, 1 image, estimated 26 secs reading time)

Ex-SEC Chairman Arthur Levitt Jr. had some thoughts on negotiating in his take on the relationship between the Biden-Harris White House and Congress. In one thought in particular, though, Levitt is badly…off.

Governance takes two. If a director opposed the CEO without proposing something better, he’d be ignored. In Washington, Republicans don’t seem interested in negotiating. … Republicans, you can oppose, but if you have an opportunity to shape policy, take it.

This is a preview of Negotiating. Read the full post (295 words, estimated 1:11 mins reading time)

President Joe Biden (D) refuses to release any visitor logs connected to visitors he has when he’s in Delaware—which is as much as a third of his time in office during his first year, just concluding. He’s defending that refusal, using the voice of his Press Secretary, Jen Psaki.

The president goes to Delaware because it’s his home. It’s also where his son and his former wife are buried, and it’s a place that is obviously close to his heart. A lot of presidents go visit their home when they are president.

This is a preview of Visitor Logs. Read the full post (203 words, estimated 49 secs reading time)

Co-President Joe Biden-Kamala Harris are having trouble getting much of their political and (pseudo-)economic agenda passed. (Aside: failure isn’t a done deal; it would behoove the pundits on the right side of center to stop their crowing and predictions of landslide Republican elections in November.)

That’s not a failure of the agenda or of Biden-Harris or of Party managers in the House and Senate, though.

Not at all, insisted Paul Begala.

I think the problem for the Democrats right now is not that they have bad leaders. They have bad followers, okay?

This is a preview of Inadequate. Read the full post (314 words, estimated 1:15 mins reading time)

The Harris half of Biden-Harris, Vice President Kamala Harris (D) has made an impressive claim. She said—and she was serious—that

legislators standing in the way of passing the Freedom to Vote Act and the John Lewis Voting Rights Advancement Act are failing to uphold their oath to defend the Constitution.

This is a preview of Irrationality. Read the full post (269 words, estimated 1:05 mins reading time)

Some Democrats have started exploring how to pare back their proposed expansion of the child tax credit in ways that are aimed at winning the critical support of Sen. Joe Manchin (D., W.Va.), according to people familiar with the matter.
Among the possibilities: Reducing the size of the credit’s expansion and limiting which Americans are eligible for it, according to the people.

Tweaking to appease a single Senator. Never mind any effort at looking for bipartisan support.

This is a preview of A Good Idea?. Read the full post (203 words, estimated 49 secs reading time)

John Lewis is a hero, you [Sinema] are a traitor to his legacy, your constituents and our democracy.

This is typical of the Progressive-Democrat Party: either you support Party, or you’re a traitor, and separately, you’re also a racist.

Bowman’s rant brings to mind a couple of quotes. I’ll leave it as an exercise for the student to name the source(s).

This is a preview of Typical. Read the full post (346 words, estimated 1:23 mins reading time)

The Biden administration plans to distribute millions of free Covid-19 tests to schools around the country, part of the federal government’s effort to keep schools open amid a surge in coronavirus cases caused by the Omicron variant.
Later this month, the administration will begin shipping five million rapid Covid-19 tests to K-12 schools each month, White House officials said.

That’s in contrast to this:

This is a preview of More Chit-Chat. Read the full post (336 words, estimated 1:21 mins reading time)

Congressman Jim Clyburn (D, SC), in an interview on Fox News Sunday, made the below claim in defense of his Progressive-Democratic Party’s Freedom to Vote Act and John Lewis Voting Rights Advancement Act, which together are intended to take the Times, Places and Manner of holding Elections for Senators and Representatives of Federal elections away from the States and to entirely Federalize those election procedures. In citing Alexander Hamilton’s (as alleged by Clyburn) statements that elections “cannot” and “should not be left up to the states,” he made this claim:

This is a preview of Clyburn Misleads. Read the full post (613 words, estimated 2:27 mins reading time)