Since schools across the US first closed last spring, sending about 50 million children to learn remotely, one looming question for educators, parents and children has been: how much has learning suffered?
Data from two national testing programs, Renaissance Learning Inc and NWEA, which are used widely by US public schools to assess students’ progress, show widespread performance declines at the start of this academic year, particularly in math. 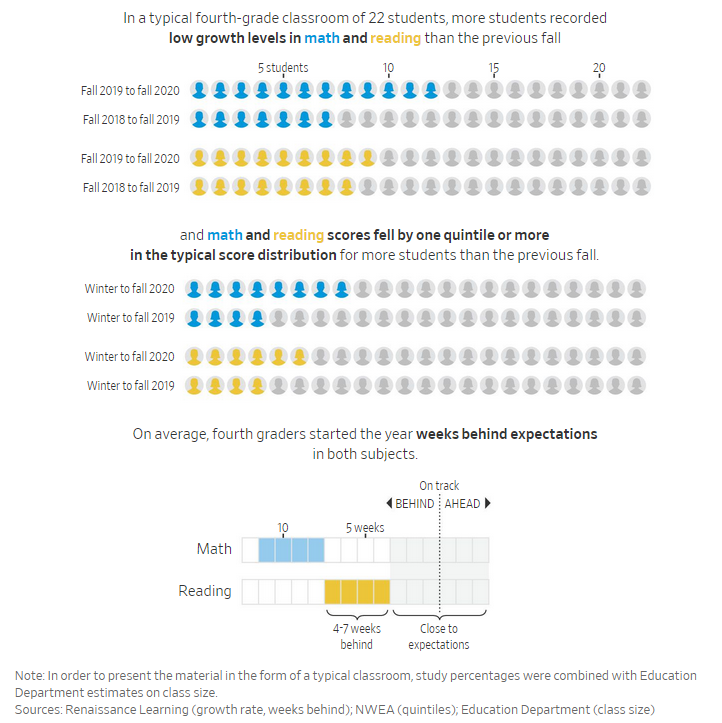 These are the outcomes. The teachers unions don’t care, though. They don’t want their teachers to return to the classroom unless and until union leadership can be guaranteed absolute freedom from the risk of Wuhan Virus infection. Which is, of course, a deliberately impossible criterion.

This is a preview of A Couple of Test Outcomes. Read the full post (175 words, 1 image, estimated 42 secs reading time)

That’s the claimed hope of the Progressive-Democrat HHS Secretary nominee Xavier Becerra—that he can find “common ground” on his late-term abortion goals.

Indeed, there’s this bit of disingenuousity from Becerra:

I understand that we may not always agree on where to go, but I think we can find some common ground on these issues because everyone wants to make sure that if you have an opportunity, you’re gonna have a healthy life[.]

Except for the aborted baby. That life gets no opportunity for health; that life is simply…terminated.

This is a preview of Common Ground on Abortions. Read the full post (184 words, estimated 44 secs reading time)

…for President Joe Biden. The President has been decidedly slow to comment on the People’s Republic of China government’s treatment of the country’s Uighur population.

Biden, who vowed to be tough on China while on the campaign trail, has been careful not to classify the human rights abuses against the Uighurs since entering office. The Trump administration declared the actions by the Chinese Communist Party (CCP) as genocide one day before vacating the White House.
The president didn’t mention China’s human rights abuses during a virtual meeting with Canadian Prime Minister Justin Trudeau Tuesday. He said that the US and Canada are coordinating “approaches to better compete with China and to counter threats to our interests and values.”

This is a preview of Another Question. Read the full post (209 words, estimated 50 secs reading time)

The United States actually had the right idea—several of them, in fact—years ago. Today, the Federal government “owns” around 640 million acres of land—28% of the land area of our nation. That’s way too much, and it’s the largest source of leverage the Feds have over oil and natural gas production by our private economy.

There are a couple of things Congress can do to reduce to irrelevance Executive Branch volatility regarding Executive Orders and access to Federal land for mineral extraction; both of them involve reduction of American land that the Federal government presumes to own.

This is a preview of Stop Worrying about Drilling Bans on Federal Land. Read the full post (584 words, estimated 2:20 mins reading time)

The Garbage Out is easily summarized: the Progressive-Democrats’ $1.9 trillion Wuhan Virus “relief” bill that the House is putting its finishing touch on and then will send to the Senate.

The garbage going in:

This is a preview of GIGO. Read the full post (513 words, estimated 2:03 mins reading time)

Leave it to Progressive-Democrats to want to bring this exemplar of spendthrift back. You know what earmarks are:

“member-directed spending,” [that] are provisions discreetly tucked away in large spending vehicles that directly fund a pet project championed by a specific member of Congress for the member’s own constituents.

Congresswoman Rosa DeLauro (D, CT) and Senator Pat Leahy (D, VT)—the respective chairs of the House and Senate Appropriations committees are about to introduce legislation that would restore the business.

This is a preview of Earmarks. Read the full post (474 words, estimated 1:54 mins reading time)

Texas State Congressman Matt Shaheen (R, Dist 66 [which includes my county]) has tweeted access to a Request for Comment regarding last week’s snow and cold storm with various utilities’ associated failures to keep supplies of electricity, natural gas, and potable water flowing in major areas of the State.

Kudos to Shaheen for publicizing this RFP.

Below are my inputs.

This is a preview of A Proposed Response. Read the full post (526 words, estimated 2:06 mins reading time)

As the coronavirus raged across Boston over the holiday season, the medical director for the city’s [Boston’s] Public Health Commission was working 5,000 miles away in Hawaii.
Dr Jennifer Lo acknowledged this past week that city officials gave her permission to re-locate her family to Hawaii last November so she could care for her elderly parents. She plans to return to Boston this summer.

Lo is a contractor, not a city employee, and so not subject to the city’s you-gotta-live-here requirement, but that doesn’t mean her Medical Director duties didn’t need to be met in situ. Those are city needs, not phone ’em in tasks.

This is a preview of Some Questions. Read the full post (285 words, estimated 1:08 mins reading time)

A letter writer in The Wall Street Journal‘s Tuesday Letters section posited an alternative to student debt: trade it for community service.

I would readily support loan forgiveness if the beneficiary were required to do community service for the forgiven debt.

Let the scofflaw see who he’s displacing with his preciousness and his debt-ducking.

This is a preview of “Working Off” Student Debt. Read the full post (318 words, estimated 1:16 mins reading time)

Frank Wilczek, himself a Nobel Prize-winning physicist, wants one, not for himself in particular, but for seemingly brilliant work that doesn’t work out.

In the heady days of the late 1970s and early 1980s, many physicists—including me—thought they were on the cusp of achieving a unified theory of the fundamental forces. A striking prediction to emerge from this circle of ideas is that protons are unstable and will eventually decay, just as many radioactive nuclei do. It was widely hoped that experimenters would find ways to verify the prediction.
Sure enough, they did. Unfortunately, subsequent work revealed that the claimed observations of proton decay could not be correct, though the nature of the experiments’ flaws was never clarified completely. This story is not unique: In recent years a number of exotic physical phenomena—including magnetic monopoles, cosmological dark matter, axions and supersymmetric particles—have reportedly been detected, only for later, more sensitive experiments to come up empty.

This is a preview of Anti-Nobel Prize. Read the full post (330 words, estimated 1:19 mins reading time)