The Biden-Harris administration wants our oil companies to produce more because energy prices are too damn high. Never mind that it’s Biden-Harris policies that have crippled American oil and natural gas production and driven those prices so much higher.

The Biden administration says that oil companies face no government constraints on drilling more in the short run, even as it presses the companies to shift long term to cleaner forms of energy in response to climate change.

Which is a complete lie.  Then we get this from Energy Secretary Jennifer Granholm, via her spokesman:

This is a preview of This Isn’t Ignorance. Read the full post (361 words, estimated 1:27 mins reading time)

Russia is continuing to withhold a free flow of natural gas to the EU, holding the flow down in order to elevate prices inflicted on the EU’s citizenry and to restrain Europe’s industrial capacity.

Gas prices have soared in Europe in recent months due to low inventories and a recovery in demand as the economy rebounds from the pandemic. The price surge has taken a toll on energy-intensive industrial activity while consumers face a steep rise in energy bills as the winter heating season begins.

This is a preview of Weakness. Read the full post (309 words, estimated 1:14 mins reading time)

President Joe Biden’s (D) and his Progressive-Democratic Party syndicate’s hatred of our oil and gas production industry is well known, and he wants to include $6 billion in additional taxes, fees, and fines on those industries in their reconciliation bill.

But those penalties also will explode the cost of a myriad products Americans use, and destroy the availability of too many others—all beyond such petty uses as fuel for our getting to and from work, or heating our homes in winter and cooling them in summer.

This is a preview of Biden’s Attack on Our Oil and Gas Industry. Read the full post (320 words, estimated 1:17 mins reading time)

[T]he potential for the industry to flourish still exists, said the Solar Energy Industries Association (SEIA), if only the state revamped some of its policies to incentivize more investment.

And this from SEIA’s Mid-Atlantic Senior Manager of State Affairs, Scott Elias:

Some states have more aggressive goals. Even 2.5% by 2030 would increase the demand in Pennsylvania.

This is a preview of This Pretty Much Says It All. Read the full post (194 words, estimated 47 secs reading time)

All of that is driving up American citizens’ energy costs, and that is reflected in the market’s anticipation of spiking oil costs. Here are a couple of graphs illustrating that. They illustrate the expectation that oil will soon cost $100/barrel, after several years of $50-$65/barrel. The first presents the spike since the start of the year in the number of West Texas Intermediate $100/barrel futures contracts against a current $70 price. 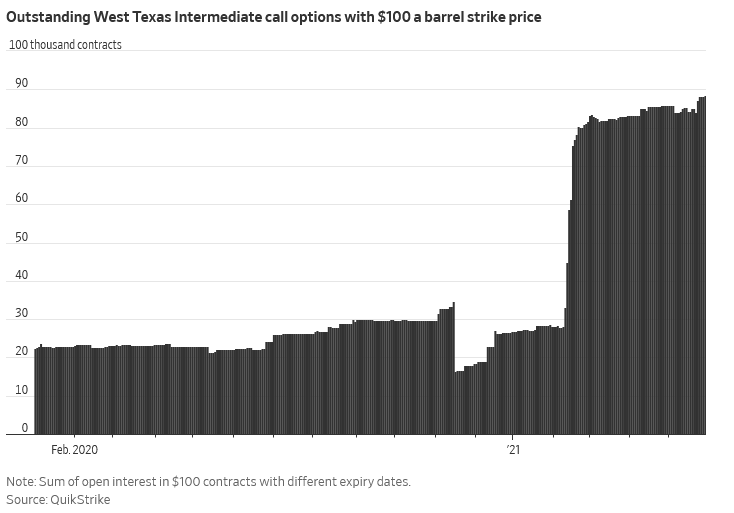 This is a preview of The Biden Oil Price Spike. Read the full post (328 words, 2 images, estimated 1:19 mins reading time)

President Joe Biden (D) likes to present himself as talking big. Unfortunately for the rest of us, and for our nation, he acts small. In the latest example, he said that he

I’ve been opposed to Nord Stream from the beginning…they know how I feel[.]

This is a preview of Nord Stream 2 and Joe Biden. Read the full post (324 words, estimated 1:18 mins reading time)

Some of you may recall that a few weeks ago, Texas had several days of electricity (and associated natural gas) blackouts, some of those areas lost water for a number of days, and some areas lost Internet connectivity—and Internet-based communications—for some time.

A Wall Street Journal ran an article last week that looked into the sources of the electricity failures; it’s well worth the read in its own right.

A couple of items jumped out at me, though, concerning ERCOT, a State-level regulator about which I’ve written before.

This is a preview of In the Land of YGTBSM. Read the full post (298 words, estimated 1:12 mins reading time)

The United States actually had the right idea—several of them, in fact—years ago. Today, the Federal government “owns” around 640 million acres of land—28% of the land area of our nation. That’s way too much, and it’s the largest source of leverage the Feds have over oil and natural gas production by our private economy.

There are a couple of things Congress can do to reduce to irrelevance Executive Branch volatility regarding Executive Orders and access to Federal land for mineral extraction; both of them involve reduction of American land that the Federal government presumes to own.

This is a preview of Stop Worrying about Drilling Bans on Federal Land. Read the full post (584 words, estimated 2:20 mins reading time)

Texas State Congressman Matt Shaheen (R, Dist 66 [which includes my county]) has tweeted access to a Request for Comment regarding last week’s snow and cold storm with various utilities’ associated failures to keep supplies of electricity, natural gas, and potable water flowing in major areas of the State.

Kudos to Shaheen for publicizing this RFP.

Below are my inputs.

This is a preview of A Proposed Response. Read the full post (526 words, estimated 2:06 mins reading time)

…report was given by UN’s International Atomic Energy Agency to its members and states Iran had on Monday produced a small amount of uranium metal, after importing new equipment into a nuclear facility that is under IAEA inspection[.]

The material produced was a small amount of natural uranium metal…meaning it wasn’t enriched. To use uranium metal for a nuclear weapon’s core, Iran would need around half a kilogram, or slightly more than one pound, of highly enriched uranium metal….

However. There’s always a however.

This is a preview of What’re You Going to Do, Joe?. Read the full post (236 words, estimated 57 secs reading time)