It seems that Philadelphia is going to be the latest recipient of illegal aliens bused from Texas.

This information was relayed to us from a community partner organization as Texas officials have not coordinated with the city. We do not have an exact location of where the bus will disembark, nor do we have any specific information about those on board, nor do we know if other buses are planned.

Neither do any of the cities getting the illegal aliens Biden flies in in the dark of night get any warning of arrival or of when they’re departing.

This is a preview of Too Bad, So Sad. Read the full post (228 words, estimated 55 secs reading time)

DoJ has fined a business in Maryland $300,000 because it asked its employees for particular items of documentation as proof of citizenship or legal resident alien status instead of accepting the generic sets of documents that “Federal law” allows. Per DoJ,

Federal law allows workers to choose which valid, legally acceptable documentation to present to demonstrate their identity and permission to work, regardless of citizenship, immigration status, or national origin.

Regardless of…immigration status. So a company wants to be careful that it’s hiring legal workers by applying tighter standards to its own workforce, and DoJ objects. ‘Course if the company is caught with illegal aliens in its employ—that regardless of immigration status part—it could lose its license to operate.

This is a preview of Another DoJ Failure. Read the full post (180 words, estimated 43 secs reading time)

The influx of illegal aliens into New York City is unsustainable, especially for the city’s schools. At least that’s the claim many involved in running the city’s education infrastructure are making, now that they’re being forced to accept the outcome of their city being a Sanctuary City for illegal aliens. For instance, Travis Civic Association President Gene Guerra claims that the school in his neighborhood is already “overflowing” and he’s unsure if the principal would be able to accept more students. He’s insisting,

There’s really no place to put these children.

This is a preview of What Did They Think Would Happen?. Read the full post (257 words, estimated 1:02 mins reading time)

Nah. The border tsar was too busy noshing with mega-donors in Texas to take the time to go to the border and see with her own eyes the disaster the Biden-Harris administrating is inflicting on us. She has people to do that, with their eyes. Except, no, she doesn’t….

She did, though, spend her busy time speechifying.

Harris [joined] a conversation at the LBJ Presidential Library on Saturday to discuss abortion access, then [gave] a speech at a fundraiser for the Texas Democratic Party.

This is a preview of Visit the Border?. Read the full post (234 words, estimated 56 secs reading time) 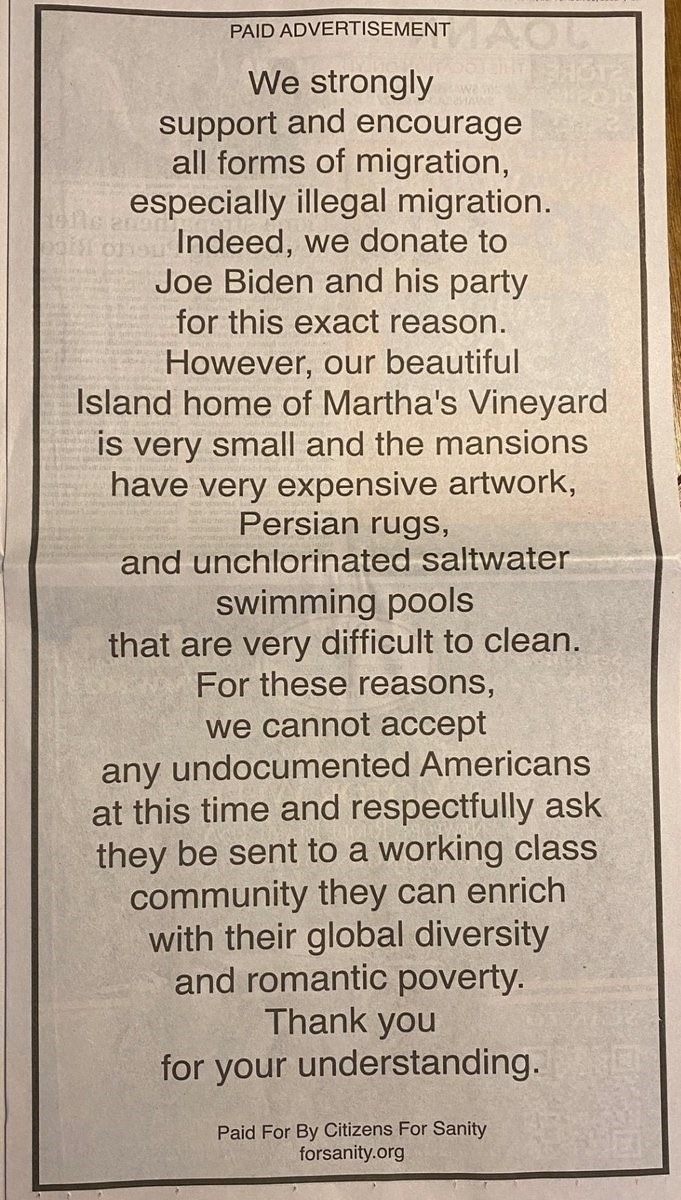 That’s how Progressive-Democratic Party politicians describe Conservatives’ and Republicans’ efforts to control our southern border and earlier to prevent the massive influx of illegal aliens and now to stop the flood that’s happening.

It’s racist to try to prevent all those illegal aliens from entering because so many of them happen to brown-skinned.

It’s xenophobic to try to stop all those illegal aliens from entering because all of them are…foreigners.

Now DC Mayor Muriel Bowser (D) has declared an emergency over illegal aliens being transferred from the southern border to the city of which she’s mayor. All 10,000 of them, so far, compared to the millions flooding across our southern border.

This is a preview of Xenophobia and Racism. Read the full post (275 words, estimated 1:06 mins reading time)