He’s still after one, one that would give the Mullahs hundreds of billions of dollars in return for their delaying, briefly, development and production of nuclear weapons. This despite the Mullahs’ avowed goal of destroying Israel, its empirical history of spending billions of dollars funding its terrorist clients and their terrorism, and the Mullahs’ current terrorism against their own subjects for those subjects’ heinous crime of protesting the Iranian government’s murder of a young woman Iranian “police” had arrested and had in police “custody” at the time of her murder.

This is a preview of Biden and His Iran Nuclear Weapons Deal. Read the full post (292 words, estimated 1:10 mins reading time)

Here’s the flow of fentanyl into our nation that President Joe Biden (D) and his administration is so actively permitting with his No Southern Border policy. (For both graphs, Left-Click|Open-in-New-Tab to get a larger view.) 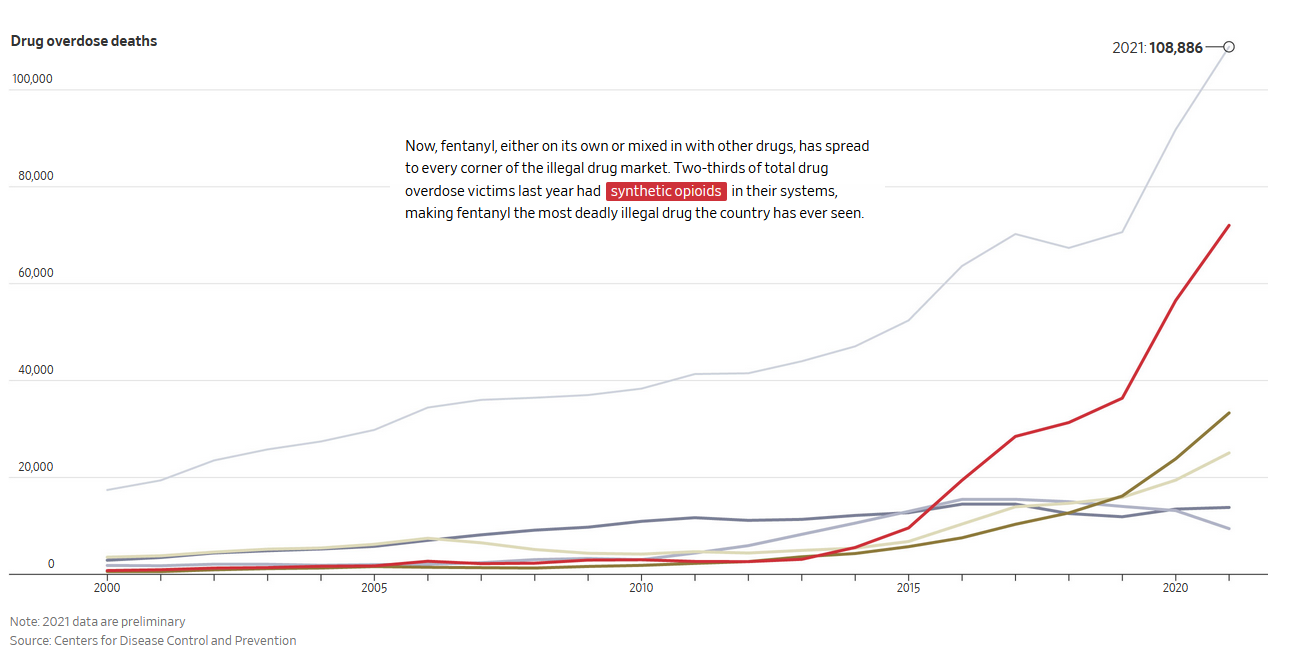 Nor is the death and destruction limited to our southern border States. 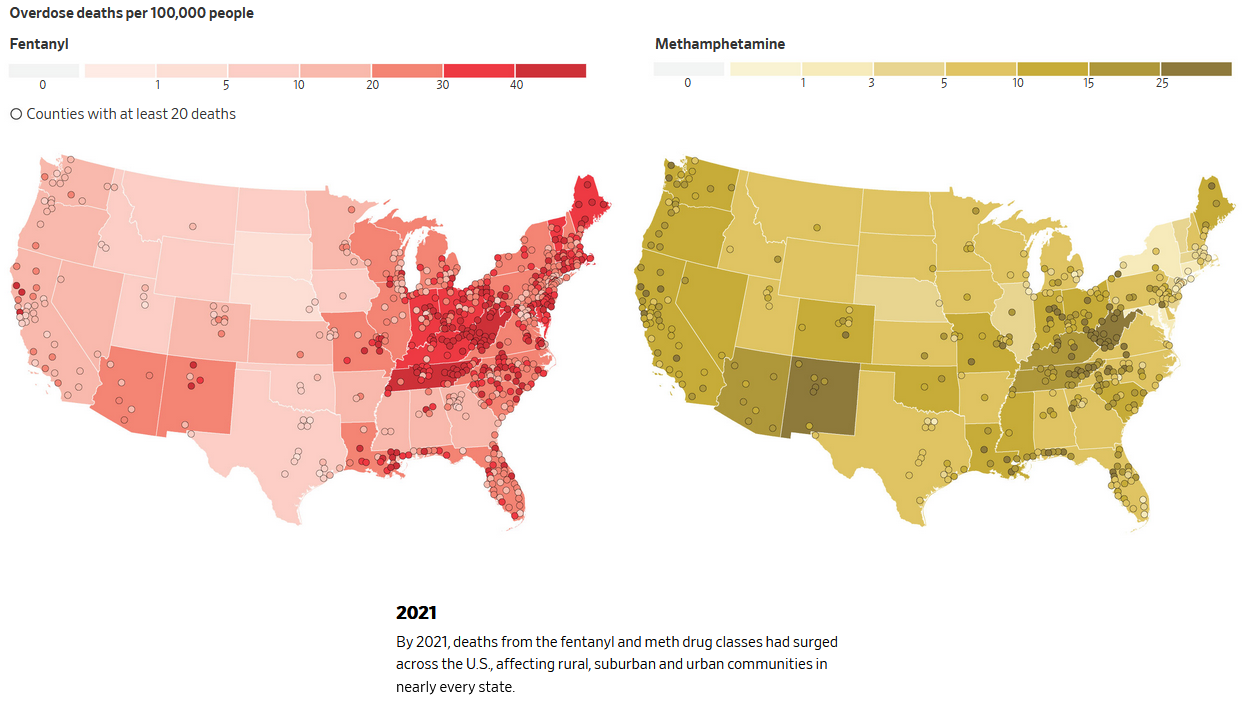 Biden is permitting the attacks throughout our nation with his refusal to deal with our southern border.

Beyond that, it’s not just the Mexican drug cartels that the Biden administration is actively allowing to flood our nation with fentanyl through his policy. The cartels are getting, free-flowingly and cheaply, the precursor chemicals for manufacturing fentanyl from the People’s Republic of China.

This is a preview of What Biden’s Border Policy Has Accomplished. Read the full post (204 words, 2 images, estimated 49 secs reading time)

A concerned mother posted on her Facebook page an objection to posters at her 7-yr-old child’s elementary school, posters that depicted different kinds of sexuality, including the virtues of being “polysexual.”

Lt Col Christopher Schilling, of Joint Base McGuire-Dix-Lakehurst—McGuire AFB—responded with threats and by siccing his Joint Base security and the local town’s police on the mother for her effrontery.

The current situation involving [the mother’s] actions has caused safety concerns for many families. The Joint Base leadership takes this situation very seriously and from the beginning have had the Security Forces working with multiple state and local law enforcement agencies to monitor the situation to ensure the continued safety of the entire community.

Last Monday, the Supreme Court heard oral arguments for 303 Creative LLC v Elenis, a case centered on Web Page designer Lorie Smith and her First Amendment right to not put messages on her designs that conflict with her religious beliefs.

In the course of those arguments, there occurred this exchange (audio is at the first link above) between newly confirmed Justice Ketanji Brown Jackson and Kristen Kellie Waggoner, CEO, President, and General Counsel for Alliance Defending Freedom, which is representing Smith in this case:

This is a preview of An Excellent Response. Read the full post (296 words, estimated 1:11 mins reading time)

MSNBC fired anchor Tiffany Cross last month, and The Washington Post columnist Karen Attiah called that racism. After all, that MSNBC anchor is a black woman. I’m frankly surprised that Attiah, and that WaPo through its columnist, didn’t cry “sexism,” too. MSNBC fired that anchor who was a woman.

This is yet another example of journalism’s racism: there are very few more insidious examples than to manufacture racism out of whole cloth. WaPo, Attiah—journalism—all know full well Cross was fired over her poor ratings and her own poor performance and that racism had nothing to do with it.

This is a preview of WaPo Racism. Read the full post (179 words, estimated 43 secs reading time)

…to extend an “emergency” in order to continue Government’s expanded powers and reduced individual liberties, an expansion that depends on that continued emergency. Here’s the Children’s Hospital Association and the American Academy of Pediatrics in a letter to President Joe Biden (D) and HHS Secretary Xavier Becerra (D):

…unprecedented levels of RSV happening with growing flu rates, ongoing high numbers of children in mental health crisis and serious workforce shortages are combining to stretch pediatric care capacity at the hospital and community level to the breaking point[.]
…
Your ongoing response to COVID-19 has successfully supported strategies to mitigate the impact of health care capacity issues for adult patients. Please take this action to allow these same strategies to be employed in service of our nation’s children.

This is a preview of Any Excuse. Read the full post (468 words, estimated 1:52 mins reading time)

Boris Johnson, in his Monday Wall Street Journal op-ed, is on the right track regarding the idea of Ukrainian President Volodymyr Zelenskyy negotiating with Russian President Vladimir Putin an end to the barbarian’s invasion. Negotiations now would be both fruitless and pointless, Johnson writes, because they would require Ukraine to surrender Ukrainian territory and they would idiotically rely on the barbarian’s trustworthiness in keeping any agreement. Negotiations now would be ill-timed, as well: the time for negotiating can only be after the barbarian has been driven entirely from Ukrainian territory and Ukraine having won, totally and decisively, the war the barbarian began.

This is a preview of Negotiations with Russia. Read the full post (522 words, estimated 2:05 mins reading time)

Alec Baldwin claims that he’s blameless when he fired his pistol, which shot led to the shooting death of Halyna Hutchins and the wounding of Joel Souza on the set of his movie, Rust. He’s suing a number of movie production personnel in his effort to duck his own responsibility.

Baldwin’s claim is that the movie production team’s armorer, Hannah Gutierrez-Reed; assistant director, David Halls; an assistant armorer, Seth Kenney; and the team’s prop master, Sarah Zachry, are the only ones responsible for the shooting. Baldwin’s lawyer, Luke Nikas, enumerated what he claims is the fatal chain of events.

This is a preview of He Chose. Read the full post (390 words, estimated 1:34 mins reading time)

Recall the brutal murder of Keaira Bennefield in New York, who was murdered, allegedly by her estranged husband after he was released from jail, where he’d been detained—briefly—for the crime of…beating Ms Bennefield. Bennefield’s mother, in the aftermath of this failure of justice, said Hochul “should be charged for the crime. She’s also responsible for the crime.”  New York’s Progressive-Democratic Governor Kathy Hochul contemptuously dismissed the elder woman:

All I can say that is a grieving mother. I understand the anguish she’s going through. She doesn’t understand how this could have happened to her beloved daughter leaving her children—her grandchildren without their mom…. The system failed and I will just simply say—I’m not going to argue with the facts with a woman who is in such pain.

This is a preview of Progressive-Democrat Contempt. Read the full post (240 words, estimated 58 secs reading time)

The advocates for Harvard and the Federal government in defending Harvard’s and the University of North Carolina’s racist selection criteria—all in the name of diversity and equity, understand—both said that they saw no end to their use of race in their selection criteria. Our Progressive-Democratic Party President Joe Biden, through his Solicitor General, doesn’t even see a need to end racism in admission selection criteria.

Seth Waxman, Harvard’s advocate, admitted that the school is trying hard to get to a race-neutral future but sees no end in sight for preferences.

Sure they’re trying to put an end to it. Or to something.

This is a preview of Racism in School Admission Selection Criteria. Read the full post (318 words, estimated 1:16 mins reading time)