North Carolina Lt Governor Mark Robinson opposed a set of social studies standards proposed to be used in the State’s K-12 schools because he considered them to be fundamentally un-American. As an aside, Robinson is a citizen of the United States and of North Carolina who happens to be black.

In response to Robinson’s opposition, WRAL published the following cartoon: 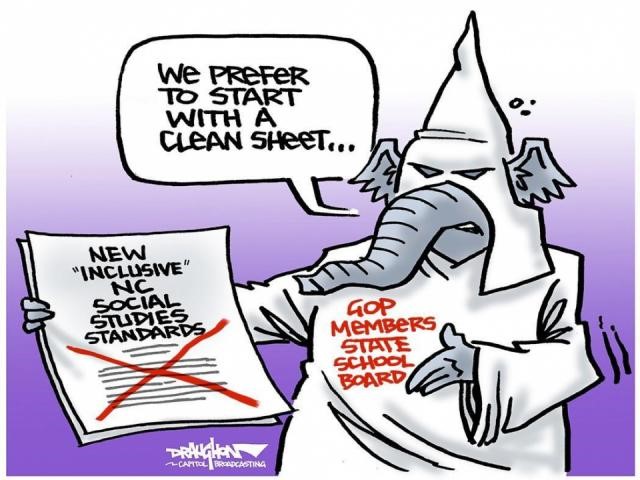 Wholly independently of the rightness or wrongness Robinson’s argument, North Carolina’s Progressive-Democrats indict themselves in two ways with this political cartoon. One way is their dishonesty in attributing the KKK to the Republican Party. As any graduate of grade school American history and social studies lessons knows, the KKK was created by the post-Civil War Democratic Party (you know that party—the same gang that forced that civil war on us at the cost of hundreds of thousands of American lives just so Democrats could try to keep their slaves) explicitly to terrorize newly freed blacks and all those who supported them.

The second way those Progressive-Democrats indict themselves is with their…dismay…over a Republican daring to oppose social studies “standards” Progressive-Democrats pretend are in some way inclusive, when those standards are explicitly designed to be divisive and to denigrate all the good things about America—like winning that Civil War and ending slavery, and putting the KKK into the garbage sack, until, that is, Progressive-Democrats dragged the thuggery back out to use as a shibboleth against anyone farther right than their Leftism.