Recall The New York Times‘ reporter, Katie Benner, who tweeted out the following, regarding 10s of millions of Americans: 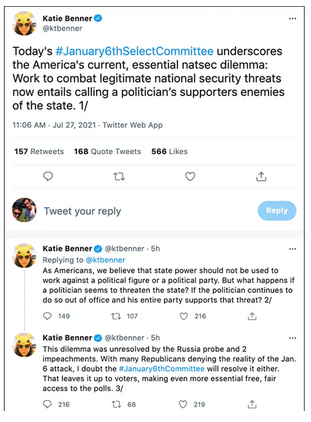 Her tweets read, in case the image proves unreadable,

Today’s #January6thSelectCommittee underscores the America’s current, essential natsec dilemma: Work to combat legitimate national security threats now entails calling a politician’s supporters enemies of the state. /1
As Americans, we believe that state power should not be used to work against a political figure or a political party. But what happens if a politician seems to threaten the state? If the politician continues to do so out of office and his entire party supports that threat? /2
This dilemma was unresolved by the Russia probe and 2 impeachments. With many Republicans denying the reality of the Jan. 6 attack, I doubt the #January6thCommittee will resolve it either. That leaves it up to voters, making even more essential free, fair access to the polls. /3

This time, I’m less interested in this…journalist’s…slur than I am in what she did about it. Amid the backsplash against her despicable smear of all of us average Americans so impudent as to disagree with her august self, Benner deleted those tweets. She claimed her tweets were unclearly worded.

Hogwash. If Benner truly were concerned about clarity, she would have left her tweets up, cited them in a quoting tweet or series of tweets, said they were “unclearly worded,” and then said in clear, concrete terms what she truly meant.

Benner chose not to. Instead, she chose to attempt to white wash her history—which is part of all our social history, part of the information database that all of us must use, for good or ill—to try to pretend her history didn’t actually exist.

Dishonesty or cowardice? You make the call. For me, it’s a tough call since there’s so much overlap: much of dishonesty is a form of cowardice.