Mark Zuckerberg is at it again, this time blocking a President’s access to his Facebook, which he created explicitly to be a public forum. But only for those of whom he personally approves. 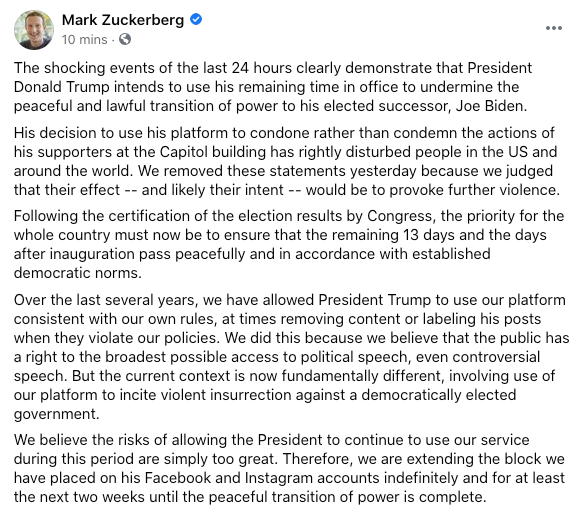 Never mind that President Donald Trump plainly has never intended to obstruct the peaceful transition of power, but merely to continue his fight to ensure only those votes legally cast and counted are counted. That he plainly expected that to demonstrate his reelection rather than confirm his loss is neither here nor there. And it certainly doesn’t compare in the slightest to the refusal to accept the outcome of the 2016 election, and the Left’s and Progressive-Democratic Party’s active and four-year-long attempts to overthrow the President duly elected that year. That was an effort Zuckerberg and his minions at Facebook not only whole heartedly approved, but they actively supported and participated in, going to the point of censoring the President’s speech.

Nor has anything Trump has said or tweeted condoned any part of the assault on the Capital Building.

This is just rank censorship. Which censorship—any censorship—is just the cowardice of those who are terrified of opposing opinions.

The clumsy or rude phrasing of those opinions is given artificially heightened importance solely to obscure the cowardice of the censors.

Update: It’s become a full-on assault on individual liberties, epitomized by the overt attack on our freedom of speech, but plainly won’t be limited to that.

We have Jack Dorsey banning all Trump speech from his Twitter, along with the speech of his supporters. We have Followers “disappearing” from other Conservatives who tweet.

We have Tim Cook openly attacking a rival to Twitter–and to Apple–with his ban of the Parler app from his app store.

We have Sundar Pichai joining the attack by barring the Parler app from his Google Android app store.

We have Jeff Bezos shutting down Parler altogether with his Amazon ban of Parler from his servers that were hosting the alternative to Dorsey’s Twitter. That shutdown, too, was done with advance notice deliberately too for Parler to withdraw its–and its users’–information from those servers.

We have Mark Zuckerberg, in addition to the above, banning #WalkAway from his Facebook, a hashtag that committed the speech crime of encouraging members of the Progressive-Democratic Party to leave Party while showing those disappointed and disaffected other places where their voices could be heard and taken seriously.

This a full-on attack by Big Tech, by a tiny few oligarchs grown too powerful and presuming to dictate to ordinary Americans what speech will be permitted in the public square, moving openly to prevent Conservatives from having any voice at all in the public square.