Some of you may be aware of the protests in Iran, protests that are growing in size and becoming subject to increasingly violent attempts at suppression by the Iranian government.  “Some of you” because the NLMSM isn’t talking much about the protests.

It turns out that Iranian women are playing a prominent leading role in those protests.

And on and on.  These women are risking their freedom, such as it is in Iran, risking arrest, beatings, perhaps their lives just to be in these protests, much less to lead many of them.

But, where are the Western “feminists” who were willing—anxious, even—to protest loudly against the inauguration of a President of whom they disapprove, protest against the perceived evils of Civil War heroes of the Confederacy, against sexism and sexual harassment and assault in the halls of Hollywood and Congress?

Never mind that these protests all were conducted wholly within the safety of a nation that proudly protects the freedom to speak one’s mind, to protest against government or any other ill, real or imagined.

Others, like Catherine Ray, Federica Mogherini’s spokesman, has uttered only bland platitudes about rights to peaceful protest and free speech.  The High Representative of the European Union for Foreign Affairs and Security Policy herself has chosen, so far, not to speak at all in her own voice.

What are these women, safe and sound in the bosom of the United States and Europe, saying and doing in support of those Iranian women?  Not much. 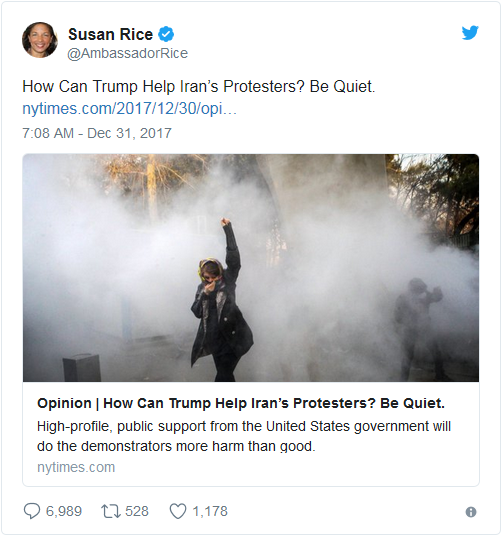 Stephen Miller, the author of the piece at the link, wants to know why these modern “feminists” don’t speak up or act concretely in support of those Iranian women.  I have a different bit of advice: stay up on the porch, ladies.  It’s safe there.  Real women are taking action.

Even porch dogs yap, though.