During the recent debate in the Arizona legislature concerning a bill that would allow school vouchers for all Arizona children, Democratic Congressman Jesus Rubalcava wrote on his Facebook page that he wanted to throat-punch one of the sponsors of the bill, Republican Senator Debbie Lesko.  The Arizona Republic captured a screen shot of Rubalcava’s Facebook post: 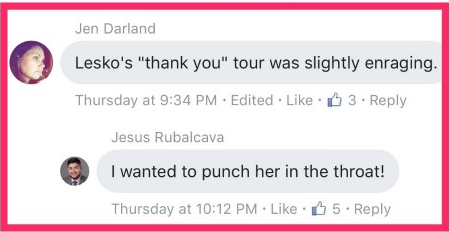 After Rubalcava’s post began circulating, after the ensuing uproar over his threat of violence against someone impertinent enough to disagree with him, he deleted his post (but not before the Republic had captured that screen shot) and apologized to Lesko.

His apology?  It followed the form of one, but its substance?  Aside from cynically playing his victim card (in his apology he also carefully pointed out that he had been raised by a hard-working single mom, as though millions of Americans—who have not stooped to threats—have not been), he already had misbehaved, and his words of apology do not—can not—undo his threat of violence against a politician whose crime was to disagree with him.

Furthermore, his threat was not uttered in the heat of a zealous debate; not a bit of that.  He wrote his threat on his Facebook page—wrote it, not spoke it—which gave him plenty of time to reflect most carefully about what he was about to publish.  And then he published it.

This is what a Democrat looks like when he has even the merely perceived power of government at his back.  Congresswoman Lesko is a very generous woman, and she accepted this Democrat’s apology.  It’s a fine example, and we all should forgive, as she has done.  But we dare not forget the threats of Democrats when they’re in government.

Nor must we overlook the fact that the Arizona Democratic Party has not yet taken action against Rubalcava.  The Party’s hesitation is instructive in itself.