James Pethokoukis, writing in a different context, presented evidence in his AEIdeas piece for us doing better with our immigration policies. First, see the graph below, with particular attention to the “Increases in the workforce (labor inputs)” part of the bars. 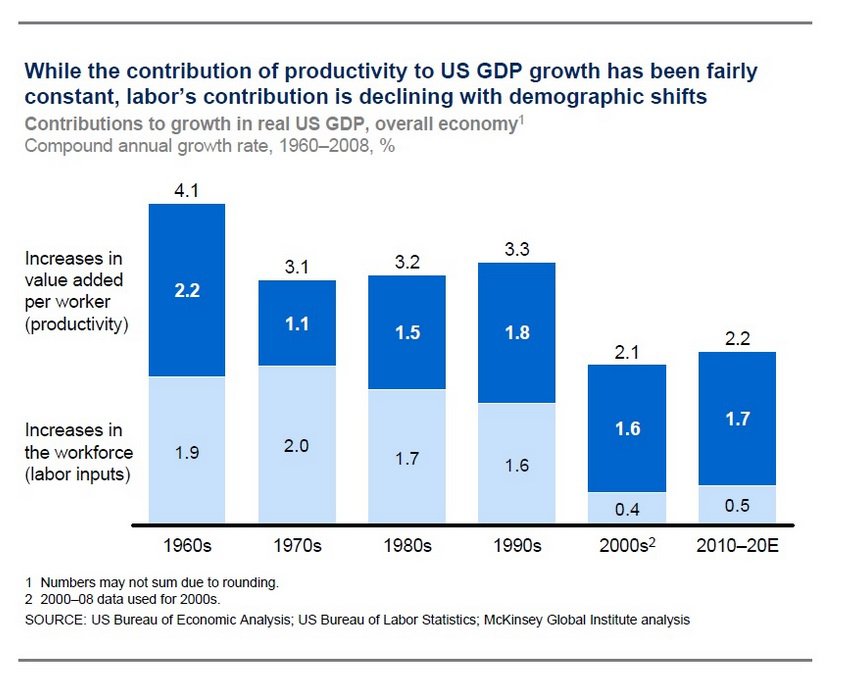 Pethokoukis’ argument centered on Republican Presidential candidate Jeb Bush’s promise to work toward a 4% GDP growth annual rate if he’s elected; Pethokoukis argued that would be hard to achieve because of shortfalls in the availability of actual laborers.

[A]bout half of US growth in the postwar era has come from higher productivity, and half from a growing labor force. But American society is getting older and working less. Given much slower labor force growth, much higher productivity is needed to make up the difference. If productivity growth just stays at its postwar average—and it’s been much slower lately—the economy’s growth potential is much lower than in the past. As economics blogger Bill McBride writes, “Right now, due to demographics, 2 percent GDP growth is the new 4 percent.”

That’s the evidence and the argument. Pethokoukis and McBride based their argument regarding demographics on birth rates. The fact is, though, birth rates aren’t the only source of new labor. Immigration not only would fill the gap; immigrants would do so promptly: they’re already wanting in (and 11 million of them are already here awaiting some mechanism to let them come out of the shadows and be fully productive—for the US).

We need to quit messing around, and find a way to strictly secure our borders while making it far easier than it is now for immigrants to enter our nation legally (which, incidentally, would put a very serious hole in coyotes’ and other human traffickers’ business), and we need to find a way to help the illegals here already (actually, the majority of them whose only crime is their illegal entry and who have otherwise been solid, productive members of their communities) gain legal status.

And get 4% GDP growth. The idea that “2 percent GDP growth is the new 4 percent” is just the contemptibly defeatist attitude of a quitter.