Or, as President Barack Obama likes to call them, “trust fund taxes.” Either way, it’s another Progressive attempt to steal the gains of one family—now with its parent safely dead—to transfer them to another group of “families” of whom Obama approves.

As the graph below demonstrates, this latest wealth “redistribution” grab by Obama would represent, if it’s passed, a 36% increase to a world-beating 68% of a family’s hard-earned accumulated prosperity. 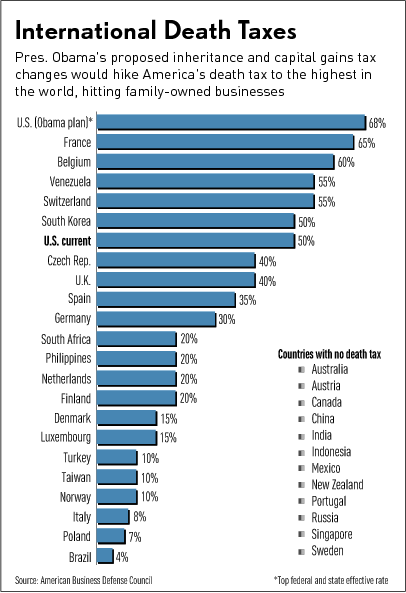 Not even the famously social-tax heaven of the UK confiscates that much of a family’s wealth on the death, nor do the social democracy nations of France, Belgium, Spain, Finland, Norway, etc. Russia and the People’s Republic of China have no death taxes at all.

Under current law, when a parent or grandparent dies, the increase in the valuation of his or her asset from when it was originally purchased is not taxed.

This is to offset the effects of the estate tax.

That business, far from being a Buffet’s holdings in Berkshire Hathaway, or a Gate’s holdings in Microsoft, is typically the family’s only asset: a mom and pop business that mom and/or pop have spent a lifetime building, with little to no outside cash available with which to pay the Obama vig. They’d have to sell the business; they’d have to sell their children’s future to pay up. That property usually is the family home, which the family finally was able to afford in the late afternoon of the deceased parent’s life. Those stocks…. No trust funds here.

But, no worries. Obama and his Democrat Party Know Better. Their money, temporarily reposing in our hands for a few years, will be well used. Obama says so.