More evidence of President Joe Biden’s (D) fantasy of a time travel weapon possessed by Russian President Vladimir Putin. This time, the evidence is the Producer Price Index, as published by the US Labor Department and printed by The Wall Street Journal. 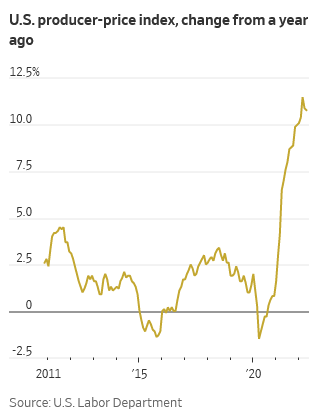 The WSJ‘s graph is constructed from data released by Labor. The monthly data in the graph are hard to read, but the WSJ‘s rendition allows mouse-over readings. What those readings illustrate is instructive.

My third-grade arithmetic says that fully 96% of the PPI’s increase had occurred before Putin’s invasion.

Plainly, for Biden’s blame-shifting assertions to be true, he has to be, once again, insisting that Putin’s regime has succeeded in developing time travel and is using it to wage economic war against us while he wages murderously killing war against Ukraine.

Oh, and one more thing. Given the lags inherent in economic forces as they move through a real-world economy, these producer-level data essentially baked in even the consumer inflation outcomes following Putin’s invasion. That shows even more clearly how fantastical Biden’s assertions are.