That’s what the Left likes to say when folks of whom they disapprove don’t talk/tweet/Facebook post/whatever about events on which the Left casts opprobrium.

There has occurred the firebombing of an Oregon Right to Life facility in the Salem, OR, suburb of Keizer.

It’s been more than a week since that cynically timed for Mother’s Day attack, and Oregon’s Progressive-Democratic Party elected politicians are being determinedly quiet about it.

Governor Kate Brown, Senator Jeff Merkley, and Senator Ron Wyden all declined to respond to multiple requests for comment via phone and email from Fox News Digital regarding the firebomb attack….

The Twitter accounts of Brown, Wyden, and Merkley also did not mention or condemn the attacks and all three have tweeted about other issues since Sunday, including Wyden, who warned Americans that their geolocation data could be “weaponized” against them if they seek an abortion.

Silence by the Progressive-Democrats. Except when they’re being overtly pro-abortion.

…pro-choice protesters across the country have stormed Catholic churches and some have called for vandalism in the Roe v Wade debate.

Caroline Reilly, of the Rewire News Group, has been particularly explicit (Jerry Dunleavy, of the Washington Examiner, had to retweet Reilly’s call because Reilly subsequently tried to rewrite her history and pretend she’d not called for murder by deleting her tweet): 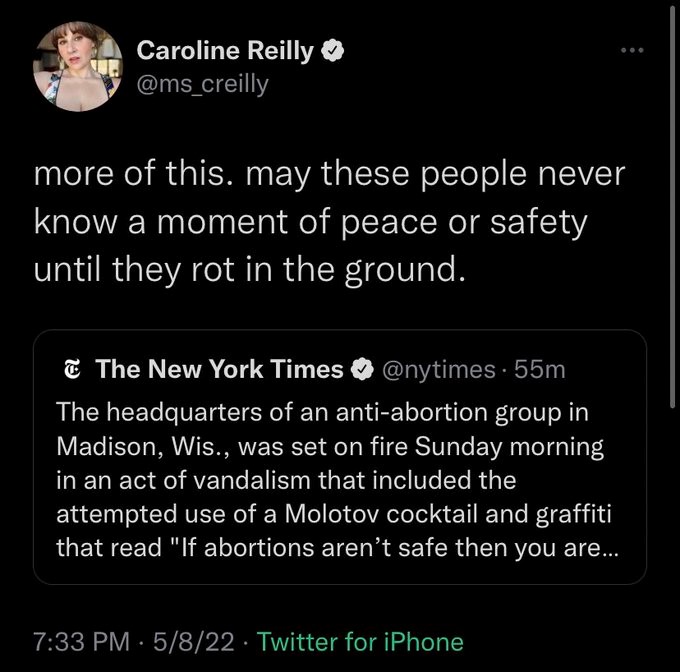 Rot in the ground. Tweeted out Mother’s Day evening, shortly after the firebombing.

But the Progressive-Democrats are silent on the matter of violence against those who disagree with them.