…must lead to Federal government tax revenue reductions. Or so Progressive-Democrats claim. Say it ain’t so, Joe. President Joe Biden (D) won’t say it, though, so I will. It ain’t so, as this table from The Wall Street Journal illustrates. 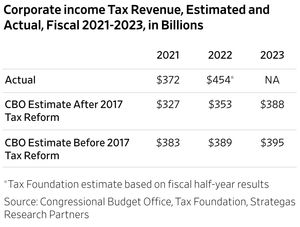 When you leave money in the hands of private economy operators—individual or corporate—they do productive things with their money. That productivity leads to more R&D, more innovation, more physical capital improvement, physical capital expansion, wage increases, more jobs (which represent the mothers of all wage increases, for many, from zero wage to an actual paycheck), the latter two leading to human capital improvement, which leads to greater private economy demand for goods and services, which leads to greater production of those goods and services, expanding the economic virtuous circle.

All of that is even before any discussion of any need for the tax revenues Big Government Progressive-Democrats claim exists.