Currie’s group organized buses to take roughly 700 Afghans, women and their families, to the [Kabul] airport, maintaining communications with the State Department, vetting the evacuees in advance and sharing passenger lists for the buses.
“The State Department was aware of the groups we were trying to assist,” Currie said. “I was told that this information had been raised at the highest levels; we had very senior people reaching out to State leadership.”
That included at least one message sent to Secretary of State Antony Blinken, she said. And she personally wrote a note to Undersecretary of State for Management Ambassador John Bass.
Authorities told the group to wait in a staging facility for 24 hours before the State Department reversed course and said it couldn’t help fly them out. 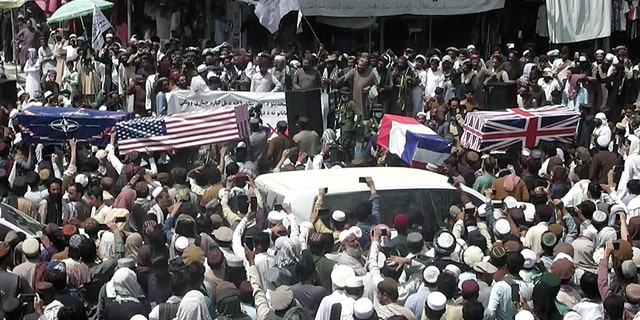 Taliban supporters in Afghanistan holding a mock funeral while hoisting coffins draped with flags from the US and other NATO countries.

None of this counts the hundreds (thousands?) of Americans Biden also has stranded—abandoned—in Afghanistan.

These represent the victory of which Biden, Secretary of State Antony Blinken, Secretary of Defense Lloyd Austin, JCS Chief General Mark Milley are so proud of accomplishing.