The people of Hong Kong are in their 15th straight week of protest against the People’s Republic of China’s moves to intervene in Hong Kong’s internal affairs, to impose yet more PRC controls over a nominally free, “two systems” city.

People of all ages, many unmasked and some carrying children, walked more than 2 miles from a shopping district, where usually busy stores were shuttered, to downtown Hong Kong. Many chanted, “Five demands! Not one less!,” “Fight for freedom!” and “Revolution of our times!”

Those five demands, which do not add up to freedom, but are a necessary early step on the path to freedom, are these:

Lam has “promised” to formally withdraw the extradition bill, but she has not honored her promise, and she has categorically rejected the others. Lam’s “promise” was a cynical effort to divide and weaken the protest movement.

However, as The Wall Street Journal put it in the article at the link,

The scale of the crowds Sunday evoked mass marches earlier this summer, suggesting efforts by Hong Kong Chief Executive Carrie Lam to weaken and divide the opposition movement are having little effect, and the crisis remains a challenge for the Chinese leadership in Beijing.

This protestor illustrates the matter. 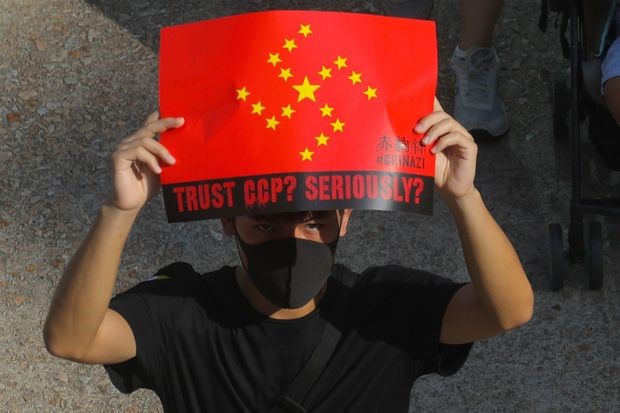 The PRC’s President Xi Jinping has a golden opportunity, here, to demonstrate the strength of consenting to the citizens’ demands, but he’s overtly eschewing it. He, and his Chinese Communist Party cronies, are simply too insecure to take the step.  And not just politically: they’re personally and emotionally too insecure.