Recall the kerfuffle over an idle tweet in which a George Washington University Associate Professor, in a mildly snarky tweet, likened New York Times Precious Columnist Bret Stephens to a bedbug.  The Prof was riffing off a headline announcing that the NYT building was infested with bedbugs.

Stephens chose to take offense, and not only did he email the Prof about it, he CCed the Prof’s Provost in a clear attempt to intimidate the professor into silence.  Or into something.  In the meantime, Stephens has earned for himself a new nickname: #BedbugBret.

But there’s something far more important here, and it goes back to the (lack of) integrity in the journalistic industry.

The Prof makes a closely related best in his op-ed in Esquire:

Bret Stephens seems to think that his social status should render him immune from criticism from people like me. …
Stephens…reached out believing my university would chastise me for provoking the ire of a writer at The New York Times. That’s an abuse of his social station.

But it’s much more than an abuse of station—a station that does not exist, properly, in the United States of America, where all and each of us are equal under law and before God.

This is an abuse of the industry of what used to be journalism.  This is a naked claim that journalism and journalists are too high and mighty for the petty rules of ordinary Americans, and we commoners have no business—no right—to tease, much less criticize, any member of the aristocracy of the press, our Betters. 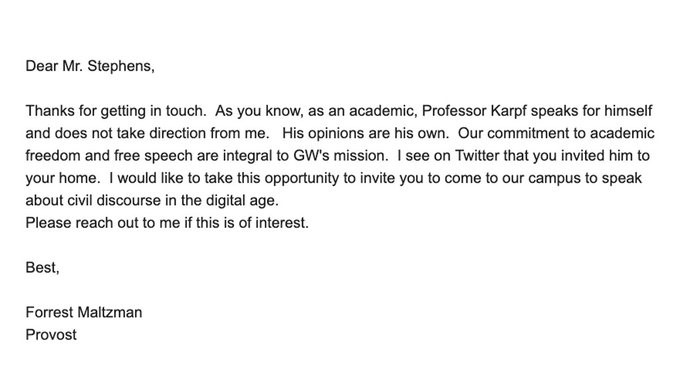 Stephens, though, as far as I can determine, has not reached out to the Provost or otherwise responded to his invitation to face the objects of his contempt on their turf. He seems willing only to face a single man in the comfort and safety of his own.

Stephens exemplifies the fundamental dishonesty of the press, and of the NYT in particular.  And, apparently, the cowardice of the bullying industry.