…is in the offing.  The piece by John O’Sullivan in Principia Scientific International is a bit optimistic, but the outcome is legitimately expected under Canadian law.  The offing-ed outcome concerns Penn State pseudo-scientist Michael Mann and his slander lawsuit against Canadian climatologist Dr Tim Ball in a British Columbia court.

It turns out that there are two legal factors of interest here.  One is that Canadian courts always grant adjournments before a trial in their belief that an out of court settlement is preferable, and Mann had moved for such an adjournment of the lawsuit’s trial that was scheduled to months ago on 20 Feb.  Ball agreed (of course), but he was able to get conditions imposed on that adjournment, one of which was that Mann would produce the data underlying his suit in court by 20 Feb.

Now (4 Jul) Mann has refused to provide the data.  That’s important scientifically because Ball had said Mann belongs in the state pen, not Penn State, and Ball produced this figure to illustrate why. 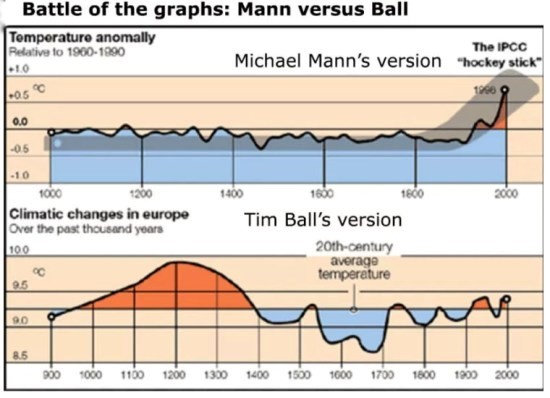 Notice that Mann’s graph disappears both the Medieval Warm Period and the following Little Ice Age, but it does draw in a pronounced uptick in the late 20th century, resulting in Mann’s infamous “hockey stick” representation. Below that, Ball’s graph, using more reliable and widely available public data—as opposed to “data” that Mann refused to produce in open court or anywhere else, shows the MWP (and the fact that it was warmer than today), the LIA, and that today’s temperature is well within the noisy variation of those prior 1,100 years.

The other legal factor, the larger one, is that this sort of contempt, this refusal to produce the data underlying a slander claim, is taken by Canadian courts as dispositive: the refused-to-produce data are taken ipso facto as false and so the slander claim itself is false.

[U]nder Canada’s unique “Truth Defense,” Mann is now proven to have willfully hidden his data, so the court may rule he hid it because it is fake. As such, the court must then dismiss Mann’s entire libel suit with costs awarded to Ball and his team.

This outcome, if the judge follows through as anticipated, will have tangential implications for Mann’s similar lawsuit against Mark Steyn in the DC Federal trial court.  There, the court had ruled that Mann could withhold the underlying data because they are his intellectual property.  The BC court ruling, based on Mann’s contempt of court, will be of interest in the US courts and may have some influence.

The influence will be tangential, though, for a couple of reasons.  One is that foreign court rulings have little influence on domestic courts: the logic in them might be useful to understand, but they do not direct an outcome.

There’s one other consideration regarding the PSI piece.  O’Sullivan is taking the (anticipated) ruling as blowing up Mann’s research and with it all of the research underlying claims of human-impacted global warming.  That’s a bit overwrought.  Court rulings are legal matters; they’re not scientific findings.  The (anticipated) ruling will blow up Mann’s reputation as a climate scientist, and little else.