A Progressive-Democrat attacked a journalist who was covering the latest CPAC convention…for his hairstyle.  Samantha Bee, the host of Full Frontal on TBS, took one look at the journalist and ran a segment in her show that included imagery of the journalist, who had a hairdo that might have been called a high-top fade in other circumstances (imagery at the link) and the remark

Never mind that the man is fighting an aggressive brain cancer, stage 4 glioblastoma.  That didn’t matter to Bee. 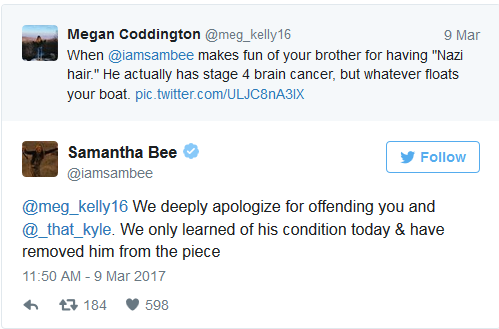 Not until the man’s sister call Bee out, anyway.  Then she tweeted that mealy-mouth pseudo-apology with its risible excuse.  There are two things about that “apology.”  One is that she did know because like any responsible adult Hollywood denizen, Bee had her intern check on the journalist and his hairstyle before putting her segment together, and then she ran it anyway.

The other thing is that, in her haste to demonize anyone not of the Left, she didn’t bother to check any facts related to the matter; she just ran with her segment.

But wait—there’s more.  The journalist she attacked turns out to be a registered Democrat.

The paranoia of the Left has gone so far out of control they even attack their own in their knee-jerk lashouts.