In a Fox News op-ed this week, pollster Doug Schoen decried President Barack Obama’s offensive refusal to present himself in Paris to stand beside French President François Hollande and with dozens of other world leaders who stood with Hollande as all of them called out Islamic terrorists’ despicable murders in Charlie Hebdo‘s* publication offices, of a French cop, and of four innocents in a Jewish bakery, all of which occurred in the French capital, Paris. 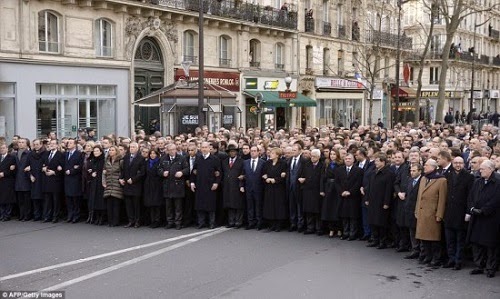 Wrote Schoen [emphasis in the original]:

To speak about the most serious terrorist attack on Western soil since 9/11 in between speeches about his free community college plan demonstrates a fundamental lack of understanding for the gravity of the situation in Paris and, indeed, the world.

To this end, it is not surprising that President Obama is the only Western leader who has refused to call this attack Islamic terrorism, even though President Hollande has declared that France is it at war with radical Islam.

But then Schoen went, I think, too far.

And to not even send Vice President Joe Biden or Secretary of State John Kerry in his place shows a level of disrespect that makes me ashamed of our nation.

I disagree. I remain very much proud of my nation and the steps America is taking, or attempting to take, to fight Evil in this world.

I am embarrassed and shamed by President Barack Obama and his failure here.

*If you follow the link to Charlie Hebdo‘s Web site, you’ll be greeted, also, by a pop-up. The French caption, translated, reads

Freedom of expression is a right

Support by making a donation!

Feel free to support them, in the name of freedom. Give ’til it hurts. Charlie Hebdo already has.