The headline numbers are in, and they seem favorable enough: unemployment has dropped to 5.9%, and 248,000 new jobs were created in September.

Even taking the 5.9% unemployment rate as legitimate, we’re still years behind schedule—not just behind the rate extant at this point in a normal recovery, but behind Obama’s promised unemployment rate which he used to sell his Stimulus package, as this graph illustrates. 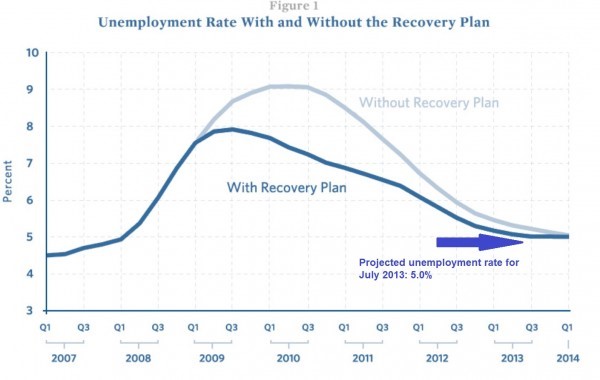 In particular, we’re still not at the 5% Obama promised we’d reach by last year. Oh, and that peak unemployment of 8% worked out to over 10%, which was worse than the No-Stimulus situation which he projected.

Additionally, new jobs created since the Panic officially ended in 2009 has only just, this past summer, matched the number of jobs extant in 2007, some three or more years later than prior recoveries. And that…milestone…ignores the fact that there are, today, 16 million more Americans in the civilian noninstitutional population (able-bodied Americans, capable of working) than there were just prior to the Panic.

What’s different between this recovery and the recoveries from prior recessions? Only Obama’s policies, actively aided and abetted by his pet, Senate Majority Leader Harry Reid (D, NV) and the latter’s Senate cohorts. All the prior recoveries proceeded much faster, and those paces occurred under both Republican and Democrat administrations.