This is part of a Facebook exchange between supposed Libertarian candidate for US Senator from North Carolina, Sean Haugh, and a North Carolina voter, via The Daily Caller. A fuller excerpt of the exchange is at Alex Pappas’ article behind the first link above. 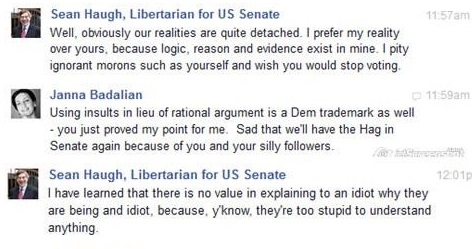 In case the image is hard to read, the exchange goes like this:

Sean Haugh, Libertarian for US Senate: Well, obviously our realities are quite detached. I prefer my reality over yours because logic, reason and evidence exist in mine. I pity ignorant morons such as yourself and wish you would stop voting.

Janna Badalian: Using insults in lieu of rational argument is a Dem trademark as well—you just proved my point for me. Sad that we’ll have the Hag in Senate again because of you and your silly followers.

Sean Haugh, Libertarian for US Senate: I have learned that there is no value in explaining to an idiot why they are being an idiot, because, y’know, they’re too stupid to understand anything.

This is the position on American citizens held Herb Croly, one of the founders of the Progressive movement, of which today’s Democrats are proud aficionados and with whom Haugh so plainly identifies.

[T]he average American individual is morally and intellectually inadequate to serious and consistent conception of his responsibilities as a democrat.