This is a brief tale of taxes and loans as they apply to American education.

In a time when our governments think the answer to correcting our public education system’s decades-long failure to improve our children’s education, as demonstrated by poor and unimproving standard test scores, is to continue their decades-long practice of throwing our taxpayer money at the system (what was it that Albert Einstein said about doing the same thing repeatedly and expecting different results…?), some of our state governments, and the good citizens therein, are rejecting the idea and doing something different.

As  The Daily Caller reports, in the recent special election in Colorado, the voters overwhelmingly rejected a ballot proposal that would have raised, yet again, taxes earmarked for public schools, when no discernable improvements from those increases were expected (by those taxpayers).

Florida, on the other hand, has been doing something different since the turn of the century: it’s lowered taxes by giving tax credits to businesses that donate to a non-profit  K-12 scholarship program that are equal to those donations.  The scholarships then are awarded to low-income families to help pay their costs in sending their children to private schools selected by those parents.  (Notice that phrase, too: “help pay.”  The families have to commit significant funds of their own; by having their own skin in this game, they have incentive to ensure their children do well in the new school.)

The effect of this Florida program is four-fold: the public schools, now having to compete for students, are doing a better job of teaching the children they retain.  The low-income families get better choices in how to get their children educated.  The state saves money: despite losing $1 in education tax revenues, it actually saves nearly $1.50 because despite the stereotype, it’s cheaper to educate a child in a private school in Florida than it is in a public school.  The local communities come out ahead because a dollar taken in taxes is only about six bits actually spent back into the local community due to the internal friction of the various government agencies each taking their taste of that tax dollar, whereas that same dollar left in the taxpayer’s hands is entirely spent in one form or another.

Now let’s look at government-guaranteed student loans for college (those guarantees, don’t forget, are covered by tax dollars from all of us).  What are these loans used for, and what should they be used for?

This table from The Daily Caller is instructive. 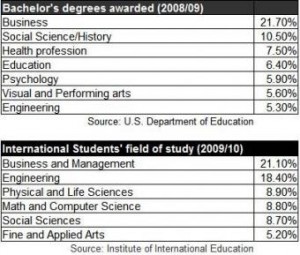 Look at this table against the backdrop of the global economic competition in which the United States is engaged.  From business, to resource development, to production, to defense, and everything in between, the United States needs well-trained and -qualified scientists and engineers.  What are our students studying?  Visual and Performing Arts.  Education(!?).  Social Science (how are we doing in this field, by the way?).  What are international students, the students of our competitors, studying?  Engineering.  Physical and Life Sciences.

If we’re going to have a government student loan program (I think we should not, but that’s another story), might it not be a little bit beneficial to target those loans in some way?  How about, if we’re going to commit our tax dollars to covering student loans at all, we at least use the program to encourage our students to study—and to stay with through graduation—the engineering and science, technology, and/or mathematics that will actually do our nation and our society some good, instead of just spotting our unformed (and uninformed) high school graduates the bucks they want simply to follow their bliss?