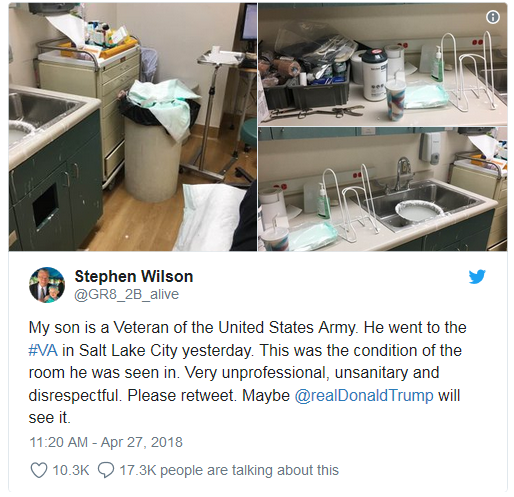 The condition of the room was the way it was when he went in, no other room was offered and no attempt to clean it up was made for the duration of his appointment[.]

Gibben also admitted that the veteran got his injections in that dirty room, but she claimed that the injection equipment—the needles, for instance—

would have been used just on him.

While that is, in fact, highly likely, how can we be sure, given the condition of the room and the level of professionalism and of integrity demonstrated by going ahead with the patient’s treatment there?

Gribbin was asked what the typical procedure was for when to clean patient rooms in order to ensure they are clean for each visit.

“We are investigating that. To be quite honest I do not work in that clinic area and I am not sure…exactly what that process is. We will be absolutely clarifying that, making sure our policies and procedures are well thought out and well communicated to staff[.]

She’s the Chief of Staff.  How is it possible that she does not know her own procedures or protocols?

Again, I say: disband the VA altogether and use its budget and nominal future budgets for vouchers for our veterans to see the doctors, clinics, and hospitals they choose, when they choose, and for the care they choose.  Enough of the VA’s trash.  Literally.

The original tweet, posted by the veteran’s father, can be seen here.  Poke through the reply thread, too.