Is technology—automation—really going to kill jobs?  No.  As many, including me, have written before, automation is only going to shift the nature of jobs.  Minimum wage laws are killing jobs, and will continue to and at increasing rates, by making robots cost effective despite their high up-front costs.

Wal-Mart, for instance, used to employ humans to track individual stores’ cash and manage their books.  Now at roughly 4,700 Wal-Marts, roughly 4,700 of those employees have been replaced by a machine that can track the books and while counting bills and coins at rates of 480 and 3,000 per minute, respectively.  Because it’s Wal-Mart, those folks, where they’ve wanted to, have taken jobs elsewhere in their store at the same pay, but those jobs are at risk, too.  Cashiers are being replaced by automated check-out stands, for instance.

Machines are made cheaper by current and rising minimum wage mandates from Government.

It’s not just Wal-Mart, either; it’s retail in general.  This graph, also from The Wall Street Journal, shows how widespread the risk is. 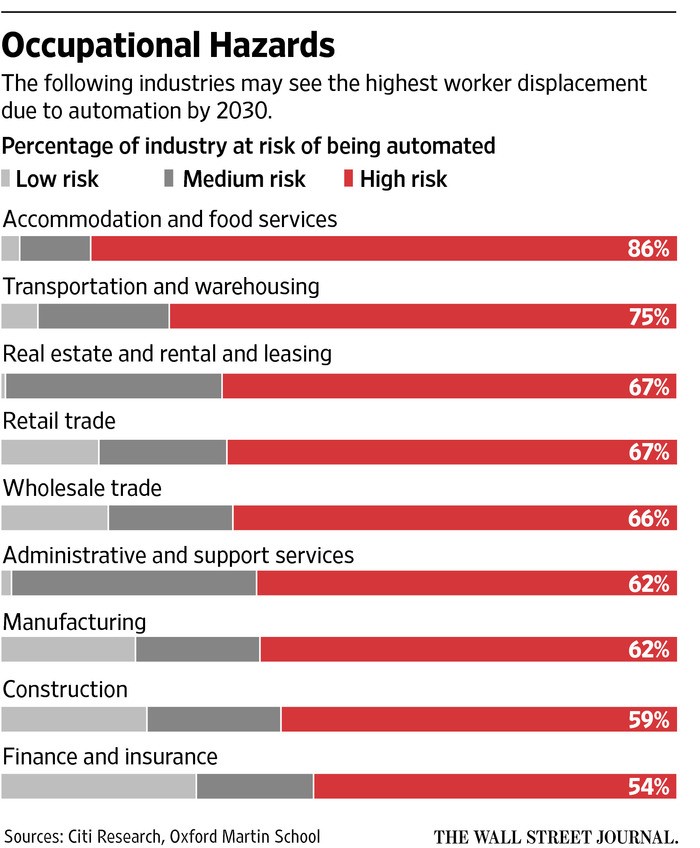 That’s good for us consumers, as those machines enable us to avoid much of the damage to our pocketbooks minimum-wage laws would do through labor-driven price increases.  Notice that the industries in the graph are especially labor-driven.  So far.

There’s another, this time insidious, impact of this increasing minimum wage driven increasing automation.  Lots of those jobs being lost are moderate-skill ones—counting the money and tracking the books, for instance—and those folks, as the Wal-Mart example illustrates, can find other work.  But what about the low skill work, where the employee truly is being paid minimum wage, because that’s all the work itself is worth (Wal-Mart’s money counter got $13/hr, above the current minimum wage, albeit threatened by $15/hr mandates)?

Those folks—the teenagers looking for summer work for the experience and to build money for college and a resume for later employment, the low/no skill worker trying to work at anything, the single mom or married spouse trying to work a second job to add income to the family—are going to be SOL.  Because Government won’t let them work for less than what Government deigns permit them to work.

The mandated minimum wage does a wannabe worker no good at all, if the job paying that mandated wage no longer exists.

That doesn’t make automation bad; as I wrote above, it’s good for us consumers.  What’s bad is minimum wage mandates—they drive automation, but the bad thing about them is they deprive the unskilled of jobs, with the knock-on failure of preventing them from becoming consumers, too.

1 thought on “Minimum Wage and Automation”