Maybe it’s a start. Regarding the terrorist attack on the satirical publication Charlie Hebdo in Paris that was carried out by Islamic terrorists, President Barack Obama issued this statement:

I strongly condemn the horrific shooting at the offices of Charlie Hebdo magazine in Paris that has reportedly killed 12 people. Our thoughts and prayers are with the victims of this terrorist attack and the people of France at this difficult time. France is America’s oldest ally, and has stood shoulder to shoulder with the United States in the fight against terrorists who threaten our shared security and the world. Time and again, the French people have stood up for the universal values that generations of our people have defended. France, and the great city of Paris where this outrageous attack took place, offer the world a timeless example that will endure well beyond the hateful vision of these killers. We are in touch with French officials and I have directed my Administration to provide any assistance needed to help bring these terrorists to justice.

Still, also missing from the statement is Obama’s usual moral equivalence temporizing by suggesting that Charlie Hebdo shouldn’t have provoked the Muslims in the first place.

Hey, it’s a new year. Maybe Obama is…changing. Condemn me for an optimist. 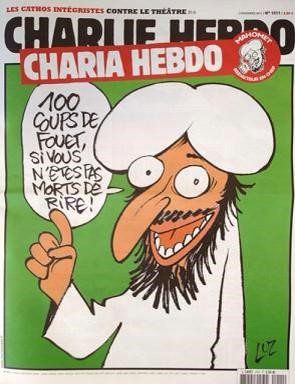