President Obama’s determination to train Syrian rebels to serve as ground troops against the Islamic State in Iraq and Syria leaves the United States dependent on a diverse group riven by infighting, with no shared leadership and with hard-line Islamists as its most effective fighters.

The Syrian rebels in which President Barack Obama has become so interested of late—those former doctors, farmers, pharmacists, and so forth”—are scattered in the Syrian west and disorganized. His efforts to train and arm them so far have been…unreliable.

The Obama administration’s plans to arm Syrian rebels have been troubled by false starts since April 2013, when Mr Obama first authorized the CIA to begin a secret training mission in Jordan.

Months after the authorization, the White House still had not delivered details to Congress about the CIA’s plans, and it was not until September 2013 that the first American-trained rebels returned to Syria from Jordan.

To date, the CIA mission in Jordan has trained 2,000 to 3,000 Syrian rebels, according to American and Arab officials.

These Syrian rebels, though, say their mission is to toss Bashar al Assad and set up an entirely different government for Syria; there’s no room for engaging additional foes.

Now see this map, adapted from the one in The New York Times article at the first link above. 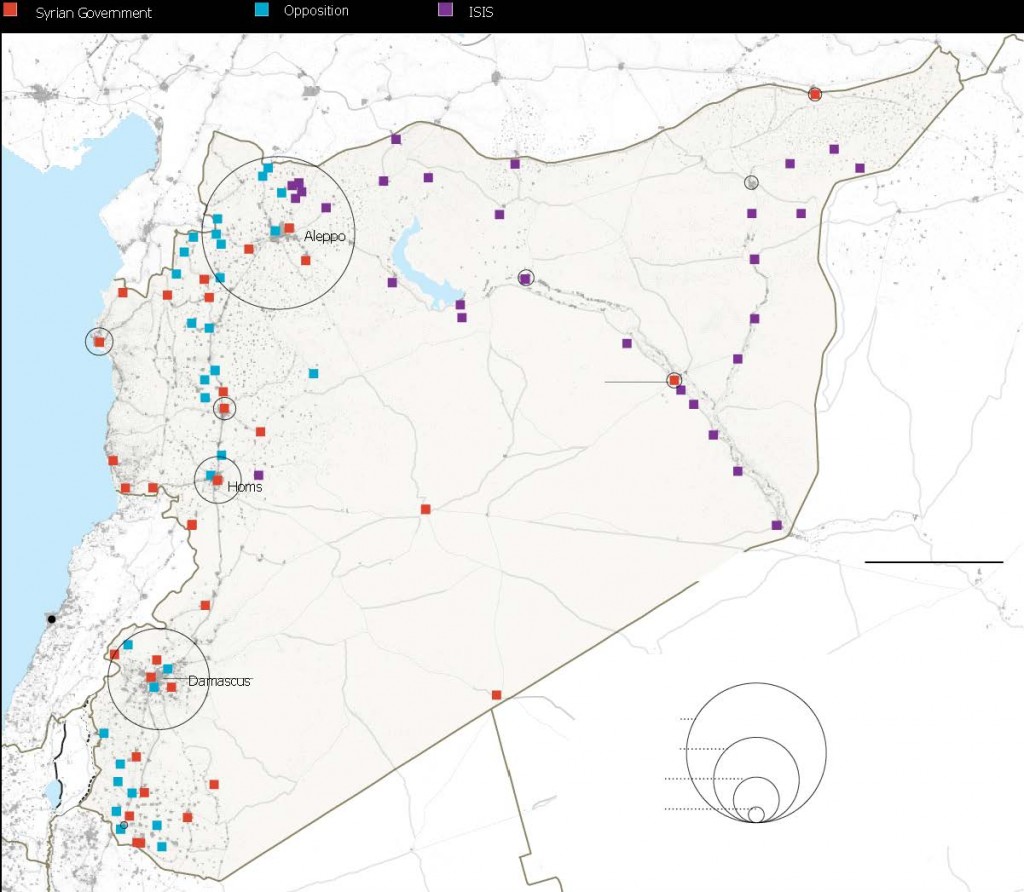 The labels are hard to read: the Red squares are Syrian government held locations, Blue squares are opposition forces other than ISIS—including Obama’s “good” rebels—Purple squares are ISIS. The major circles are, from North to South, Aleppo, Homs, and Damascus.

The “good” Syrian rebels are in the Syrian west. ISIS forces are in the Syrian east, where they’re contiguous with their forces in Iraq. The rebels would have to figure out how to disengage from al Assad’s forces in the west, quitting their mission; boogie on over to the east; and then engage ISIS. Which, courtesy of the Iraqi “army’s” glide step south, away from ISIS, has lots of American equipment, weapons, and ammunition.

Of course Obama knows this. But he gave a speech, and now he expects the problem to fade from the public’s attention.

Terrorist butchery may not let Obama have his way.

Aside for Fox News‘ Julie Banderas and Catherine Herridge, the latter of whom especially should know better: these, now three, men were not murdered—that’s a criminal act. No, these three men were butchered—acts of evil.