Are we reaching a tipping point?  The Director of the Center for Data Analysis at the Heritage Foundation, Bill Beach, says,

We have found that one out of five Americans are significantly dependent on the federal government for the basics of life[.]

These figures illustrate his point: 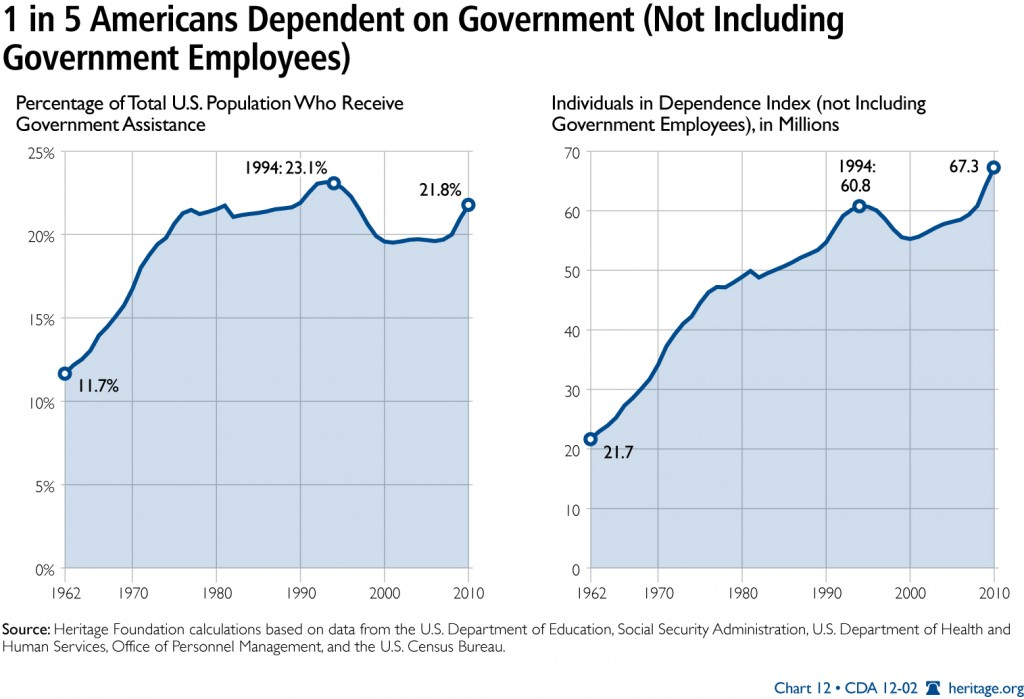 Individuals in Dependence Index (the right side) measures the number of individual Americans who depend on the Federal government for such things as housing, food, income, student aid, or other assistance—things that once were considered to be the responsibility of individuals, families, neighborhoods, churches, and other civil society institutions.  This isn’t just a Progressive problem, either.  As the figures show, the increase in Americans’ dependency on government handouts—which is to say, on the largess of incumbent politicians—has been going on for decades.   The number of dependent Americans has tripled in the last 50 years—that’s two generations: we’re raising our children with a preset habit of dependency.

Indeed, today by other measures, about 40% of Americans are either “dependent” or “reliant” on federal checks, and 70% of the population takes more out of the federal government in benefits than it pays in taxes.

There’s another dimension to the problem, too.  Beach also points out that

Sending out all those checks and aid now takes up a whopping 70 percent of the federal government’s budget. With the U.S. borrowing 43 cents of every dollar it spends, it’s plunging the country deeper and deeper into staggering levels of debt.

This figure illustrates the magnitude of the problem from another perspective:

Forty-nine-and-a-half percent of all the people in the United States are not paying an income tax….  With half the country not contributing to the general revenue and with a third getting money from Uncle Sam, Beach worries it could permanently—and dangerously—warp the nation’s politics.

This is not something even the greatest economy in the world can afford to do for much longer.

We’re rapidly moving from a nation proud of our individual capacity, confident in our ability as individuals to take care of our own responsibilities, and firm in our moral obligation to, in John Adams’ words, “acquiring, possessing, and protecting property; in fine, that of seeking and obtaining [our own] safety and happiness” to a population of people that are increasingly dependent on—beholden to—a large, controlling, and so intrusive, central government.

We can’t sustain this economically.  This reversal of our moral foundation is even more unsustainable.