Because we need some.

I can’t believe I got fired from the calendar factory. All I did was take a day off.

I just found out I’m colorblind. The diagnosis came completely out of the purple.

Just burned 2,000 calories. That’s the last time I leave brownies in the oven while I nap.

A cop just knocked on my door and told me that my dogs were chasing people on bikes. My dogs don’t even own bikes….

That’s enough of that.

This is a preview of Humor. Read the full post (548 words, estimated 2:12 mins reading time)

Especially on this day….

I got fired from my job because I kept asking my customers whether they would prefer “Smoking” or “Non-smoking.”
Apparently the correct terms are “Cremation” and “Burial.”

This is a preview of Because It’s Time Again. Read the full post (419 words, estimated 1:41 mins reading time)

…just to extend the holiday a bit. Along that line, this is the only post for today.

As one frog said to the other, “How time is fun when you are having flies.”

This is a preview of Humor. Read the full post (489 words, estimated 1:57 mins reading time)

…for the fun of it. My wife yells at me over elephant jokes, so here are these, instead.

This is a preview of Liars Lying. Read the full post (588 words, estimated 2:21 mins reading time)

…for some humor.  Bear with me.

Many years ago I was in Wyoming elk hunting with a guide in prime grizzly-bear territory. Camped in an area with a host of bear tracks in the surrounding snow, I asked one evening how to stay safe from grizzly bears.
“First, tie bells to your shoes so they can hear you. Second, learn the difference between black bear and grizzly bear scat.”
I asked about the scatological difference.
“Grizz scat has bells in it.”

This is a preview of Because It’s Time. Read the full post (503 words, estimated 2:01 mins reading time)

Your momma’s so ugly, the government moved Halloween to her birthday.

Your momma is so fat, I took a picture of her last Christmas and it’s still printing.

Your mamma is so fat she doesn’t need the internet, because she’s already world wide.

A lady comes home from her doctor’s appointment grinning from ear to ear. Her husband asks, “Why are you so happy?”
The wife says, “The doctor told me that for a forty-five year old woman, I have the breasts of a eighteen year old.”
“Oh yeah?” quipped her husband, “What did he say about your forty-five year old ass?”
She said, “Your name never came up.”

This is a preview of Time for a Break. Read the full post (359 words, estimated 1:26 mins reading time)

Mahatma Gandhi, as you know, walked barefoot most of the time, which produced an impressive set of calluses on his feet. He also ate very little, which made him rather frail and with his odd diet, he suffered from bad breath. This made him a super calloused fragile mystic hexed by halitosis.

This is a preview of We Need a Break. Read the full post (335 words, estimated 1:20 mins reading time)

Some humor after a poet/playwright of some years past.  Bonus points if you can identify the person.

A most notable coward, an infinite and endless liar, an hourly promise breaker, the owner of no one good quality.

His wit’s as thick as a Tewkesbury mustard.

I’ll beat thee, but I would infect my hands.

More of your conversation would infect my brain.

Thine face is not worth sunburning.

By my life, this is my lady’s hand these be her
very C’s, her U’s and her T’s and thus makes she her
great P’s.

This is a preview of It’s Time Once More. Read the full post (231 words, estimated 55 secs reading time)

Via Heatstreet (the article in front of this bit, on a separate matter, is worth the read, too: if it doesn’t angrify you, it’ll amuse you terribly). 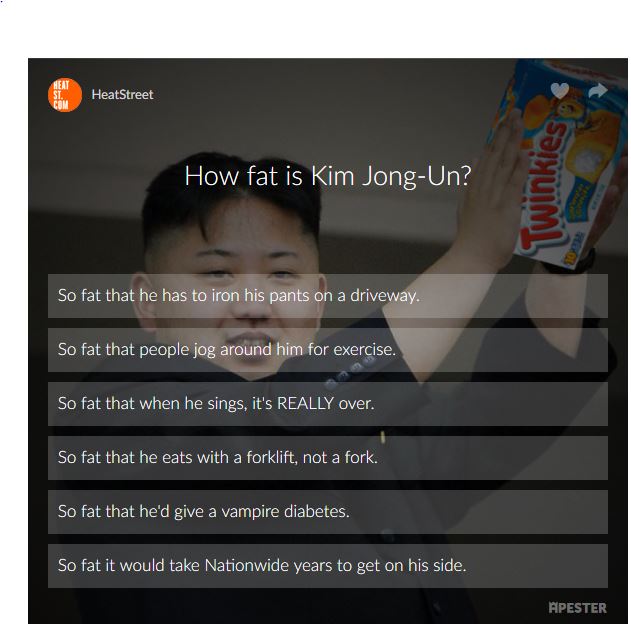 This is a preview of Because We Need a Chance to Laugh. Read the full post (170 words, 1 image, estimated 41 secs reading time)