Is Russia running out of military age bodies to feed into the barbarian furnace that Russia’s President Vladimir Putin has lit off with his invasion of Ukraine? Duma speaker Vyacheslav Volodin:

Today, especially, we need to strengthen the armed forces and help the Ministry of Defense. Our Supreme Commander is doing everything to ensure that our armed forces win, and we need to help[.]

Then the Duma moved to raise the upper age limit on military service from the erstwhile 40 years to…no limit at all.

This age pyramid, from the CIA’s World Fact Book, illustrates one facet of Russia’s problem: 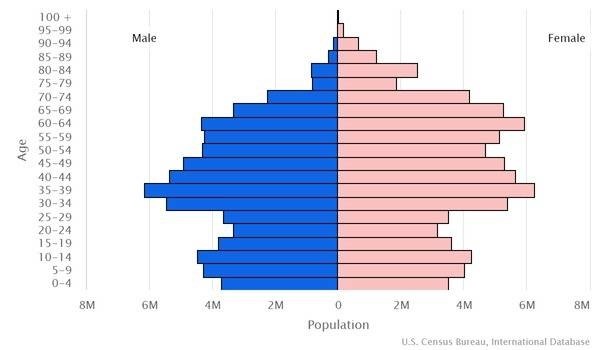 The prime age group for Russia’s army—the blocks from 20 years old to 29 years old—is the smallest set of blocks on the pyramid that are younger than 65 years old. It’ll be five years, at least, before that changes—and that change is temporary: below10 years old, the population blocks shrink again. Russia’s birth rate just isn’t there.