Much is being made of the collapse of the Russian ruble since the sanctions with which we’ve answered Russia’s invasion of Ukraine went into effect. Here’s the US Dollar-Russian Ruble exchange rate over the last month (as of 6 March 2022): 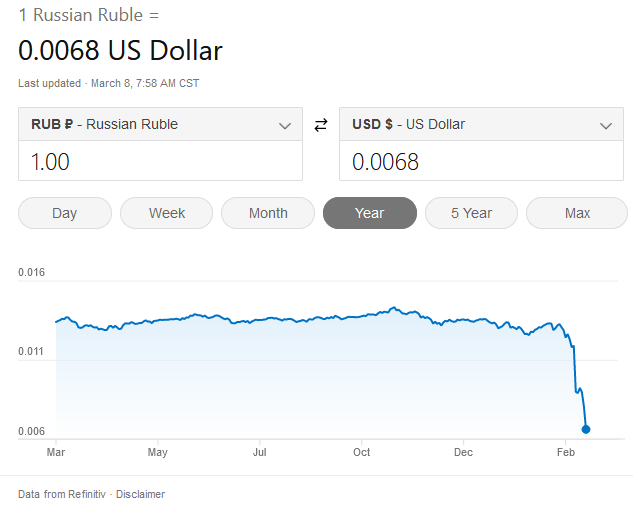 For context, here is the performance of the ruble against our dollar since 30 January 2012: 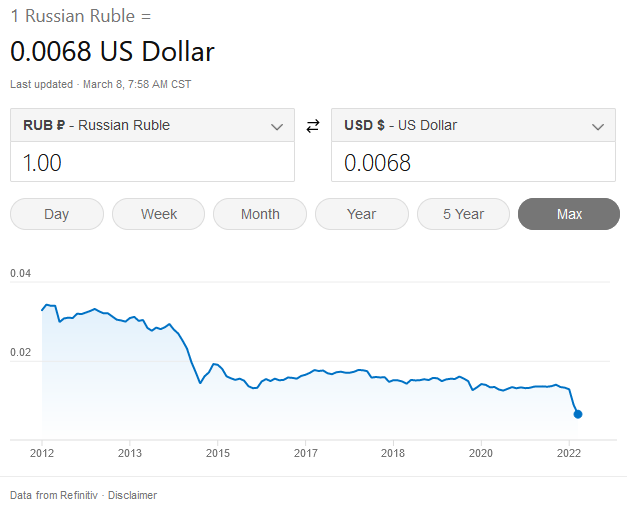 The current drop is sharp, but so far, it looks a lot like the drop in the latter half of 2014—when sanctions were going in over Russia’s first invasion of Ukraine and its occupation of Donbas and Crimea, and following which the ruble more or less stabilized into a (very) slow degradation vis-à-vis our dollar.

The current round of sanctions are important, and the further devaluing of Russia’s ruble are important, but history suggests that the exchange rate will once again more or less stabilize without changing Russia’s behavior.

Concrete support for Ukraine remains critical, and that concrete action includes sharply increasing the transfer of arms—including combat aircraft and more capable anti-aircraft batteries than just (but not instead of) Stingers—transfer of offensive weapons, so that Ukraine can drive the barbarians back out of their nation; and a cessation of the Biden-Harris’ constant retreat whenever Vladimir Putin threatens war against us.