USAF General and Supreme Allied Commander Europe (NATO) from 2013-2016 Philip Breedlove, along with “former officials and analysts,” have posited a scenario for a partial invasion of Ukraine by Russian President Vladimir Putin. The image below Breedlove’s supposition also is supplied by the WSJ. I’m disregarding Putin’s naval maneuvering in the Black Sea in this post.

The northern portion of Russian forces arrayed against Ukraine could easily drive due west through Belarus and arrive very close to Kyiv relatively unopposed. Ukraine’s best forces are tied down on the line of contact on the border of Donbas. So this northern thrust would bypass the most capable Ukrainian forces.
Such a thrust could be used by the Kremlin to put pressure on Ukrainian President Volodymyr Zelensky’s government and attempt to force concessions or perhaps try to bring about its collapse, former officials and analysts said.
A separate group of Russian forces in the east, General Breedlove said, could push into Donbas to support the Russian garrison there and Russian-backed separatists.
Still a third group of Russian forces in Crimea and southwest Russia could seize terrain along the coast and encircle the port city of Mariupol to cut it off from the rest of Ukraine. 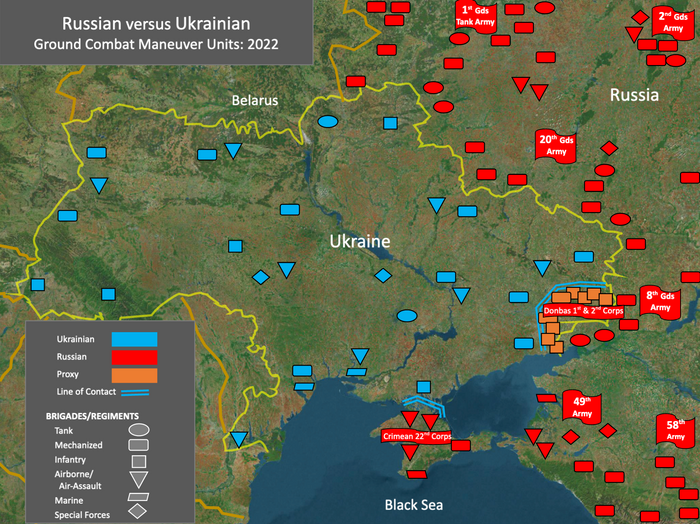 I think Breedlove understates the case. If Putin is going to take that northern route, he won’t stop with merely threatening the government in Kiev; he’ll take all of Ukraine—which is what he wants, anyway.

Beyond that, a thrust up from occupied Crimea won’t be used merely to isolate Mariupol; it will form the other side of the pincer to be used in seizing all of the nation. The attack into the Donbas will serve only to keep the bulk of the Ukrainian military occupied there.

If this is the invasion plan, look, too, for the attack into the Donbas to proceed for a couple of days before the attacks through Belarus and up from Crimea go in; Putin will be looking to get those best forces fully involved and their destruction well in progress first.

In the end, too, the whole invasion and conquering affair will take just four to six days—far too fast for Biden-Harris’ “we’ll sanction the hell out of you if you invade” nonsense even to begin to do anything. Fast enough, even, to be well inside Biden-Harris’ decision loop of beginning recognize the invasion in progress, then beginning to think about applying those “devastating sanctions.”