This one was done by ISEAS-Yusof Ishak Institute a research institute established by the government of Singapore.

Organizers sent the survey late last year to government officials, academics, and other stakeholders from the 10 countries comprising the Association of Southeast Asian Nations (ASEAN).

Here are some interesting tidbits from the report. First, the nations’ overall concern about the situation in the South China Sea: 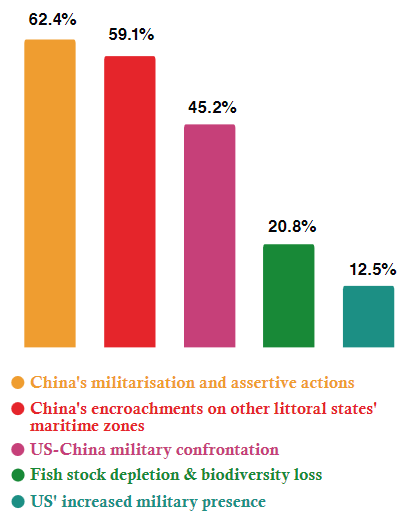 Notice that—even concerns about a US-PRC confrontation are a distant 3rd to concerns about the PRC’s misbehaviors. And of those 12.5% concerned about our own military presence, Singapore (6.3% [of those 12.5%]), Vietnam (4.6%), and the Philippines (4.5%) have little qualms about it. These are the nations most directly threatened by the PRC’s acquisitive adventurism.

Next, the nations’ preferred response: 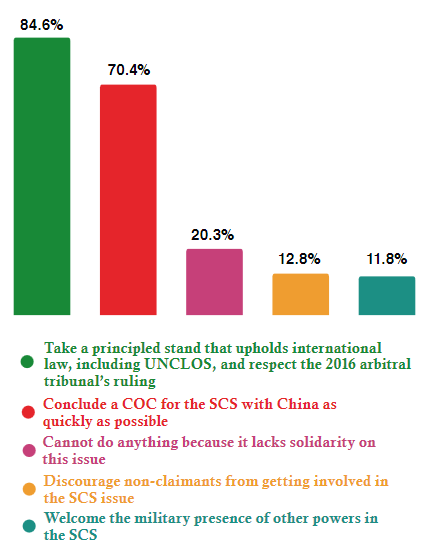 The vastly preferred solutions are the nations’ enforcement of the UN Convention on the Law of the Sea, which aligns to a large degree with the US’ position on freedom of the seas, and the conclusion of a Code of Conduct with the PRC, which agreement would severely hamstring the PRC’s seizures since the nations’ view of a legitimate COC would have it align tightly with the UNCOS.

These results, excerpted from a broader-reaching report, show the opportunities that former President Donald Trump was working to exploit, and that remain for President Joe Biden to exploit.

The entire report is worth reading, and it can be read here.

h/t to Just the News