For the richest Americans, Democrats want to shift toward taxing their wealth….

At the end of 2017, US households had $3.8 trillion in unrealized gains in stocks and investment funds, plus more in real estate, private businesses, and artwork[.]

Gimme that money, say the Progressive-Democrats. You didn’t earn that. And besides, whether you did or not is irrelevant. We have better uses because just shut up.

Senator Ron Wyden (D, OR) has given the game away.

The whole tax system is stacked in favor of the tax-avoidance crowd[.]

Because it’s government’s money, not private money.  Never mind that were tax rates not so usuriously high, no one would have to work hard to pay the minimum the law requires (honest efforts that guys like Wyden, in wide-eyed innocence, call “tax avoidance”).

Aside: the article opens with this:

The income tax is the Swiss Army Knife of the US tax system, an all-purpose policy tool for raising revenue, rewarding and punishing activities, and redistributing money between rich and poor.

Which is what I’ve been saying, along with many others, all along. Our tax code is for social engineering not so much for raising revenue for Constitutional purposes.  And that’s a fatal flaw.

Second aside: Progressive-Democrats ignore how much more taxes the Evil Rich pay than the rest of us, as illustrated by this graph from the same article. It’s never going to be enough because you’re still talking—shut up, I said. 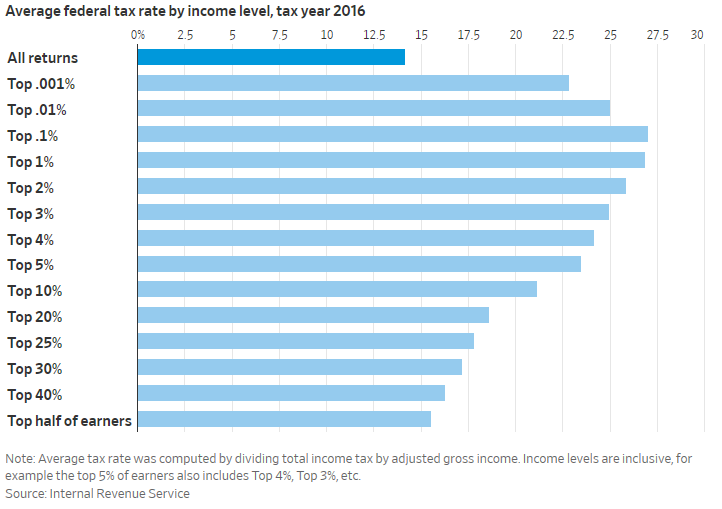 1 thought on “That’s Not Your Money”