This image, from a Deutsche Welle article on Venezuela’s inflation rate—which last month reached 24,571% year-on-year—says it all. 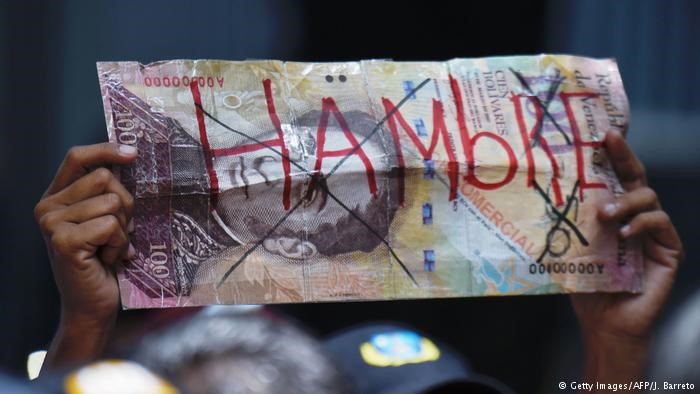 The word drawn on the 100 bolivar note (and yes, it’s a real note, and it’s actually that big) translates to “hungry.”  In the context, it means more broadly, “a widespread, intense, and prolonged shortage of staple foods that a population suffers.”

Hungry indeed, too.  A bit over two pounds of meat cost about 2 million bolivars (or did once, daily inflation is running at 2.4%), or €16.9 or $20, against a surgeon’s monthly salary of not even 6 million bolivars.  Meat, not steak in particular.  That’s some expensive hamburger or shank cut.

And, not to put too fine a point on it, that works out to a bit over three ounces of meat per day, with nothing left over for anything else: vegetables, rent, transportation, etc.  And that’s for a relatively well off man like the surgeon.  What about the middle class, or especially the poort.

This is reminiscent of what Joseph Stalin did to the Ukrainians and White Russians when he collectivized—socialized—the Soviet Union’s kulak farms.