There’s a dismaying graph in Wednesday’s Wall Street Journal that illustrates the combat readiness of several of NATO nations’ forces. 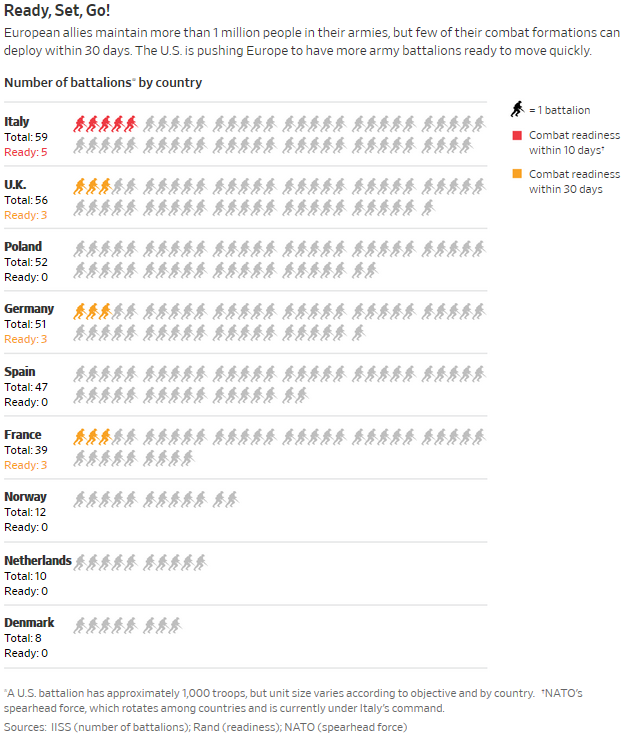 If Europe came into conflict with Russia, only several thousand of the more than one million troops in its armies would be ready for rapid deployment, military planners fear.

Plans to correct this (using the term loosely) don’t come close to the capability regularly exercised during the Cold War, when the US planned for moving 10 divisions into Europe within 10 days.  Current planning goal is to feed dribs and drabs into the furnace.

A US proposal would have the alliance commit to having 30 battalions, 30 fighter squadrons and 30 naval ships ready to deploy. That would translate to roughly 30,000 troops and more than 360 fighter planes.

Sadly, given Europe’s long history of free-loading off US nuclear and soldier commitments, and the EU’s current reluctance even to meet the nations’ 2% of GDP on defense commitment, that’s probably all we can expect out of that continent.

Feeding the furnace: 30 days was all that was necessary in WWII to overrun Poland once the Germans crossed the frontier, and it was all that was needed to knock France out of the war and push the remnants of British forces off the continent once Hitler moved west.  Only 60 days after Barbarossa went in, the Germans were approaching Leningrad, were over halfway to Moscow, and had overrun half of today’s Ukraine.  And that was against an allied contingent that, in retrospect, was better equipped and numerically superior, at least in the West.  The lack of political will then and now is the same, and Putin has shown the willingness to aggress as did Hitler, even if Putin is quite a bit more subtle about it.

And: the 30 days is from the decision to put the forces “on alert.”  Given the amount of warning available today, with the speed of modern communications, transportation, and so on—the ability to deliver tactical surprise—what is the time relationship between going on alert and having actually to launch the forces?  Thirty hours seems more like reality than does 30 days.

The graph, too, is misleading to an extent.  Italy currently can produce 5 combat-ready battalions in 10 days, while three other European nations can produce all of 3 combat-ready battalions apiece—in 30 days.  The rest, none at all in the time frame.  But what does that mean?  What is the actual combat capability of these nations’ units?  Until the term is normalized, the comparisons in the graph have only the coarsest of meanings.