See the table below, from The Wall Street Journal.  While the Left and its NLMSM emphasize the differences, and the Progressive-Democratic Party denizens rail at the claimed iniquities in their manufactured dudgeon, the tax reform bills on offer from the House and the Senate are remarkably similar.  The agree right down the line on the goals of tax reform, and they agree right down that same line on the means of achieving those goals.  The differences between the two bills are matters of degree, details bordering on trivial. 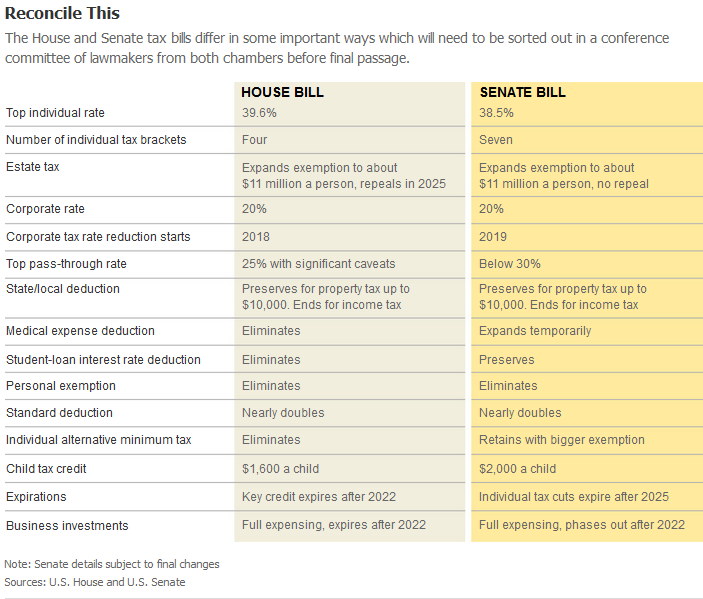 Tax rates and brackets differ only slightly, even the Senate’s seven brackets only amount to a finer parsing of income.  In both bills, the death tax disappears for at least eight years—four House election cycles, a Senate election cycle, and two Presidential election cycles.  It’ll be tough, even for the Progressive-Democratic Party, to let the death tax reappear after that amount of time, and the same difficulty will exist for letting the individual tax cuts disappear.

The biggest difference is with the Medical Expense deduction, but that effect on our general taxes or on Federal revenues flowing from the tax code reform is minor; settling it entirely in favor of one house or the other, without compromise, should be easily doable.

The House-Senate Conference should be able to settle these minor differences quickly.  Whether the Conference Bill passes both houses then will depend in large part on the egos of a very few snowflake Republican Senators.  Keep their votes in mind come primary season.