The House has one, and the Senate has one.  The Wall Street Journal, oddly, is making out like the differences between the two are enormous.  Yet, here’s the WSJ‘s own chart illustrating these humongous differences. 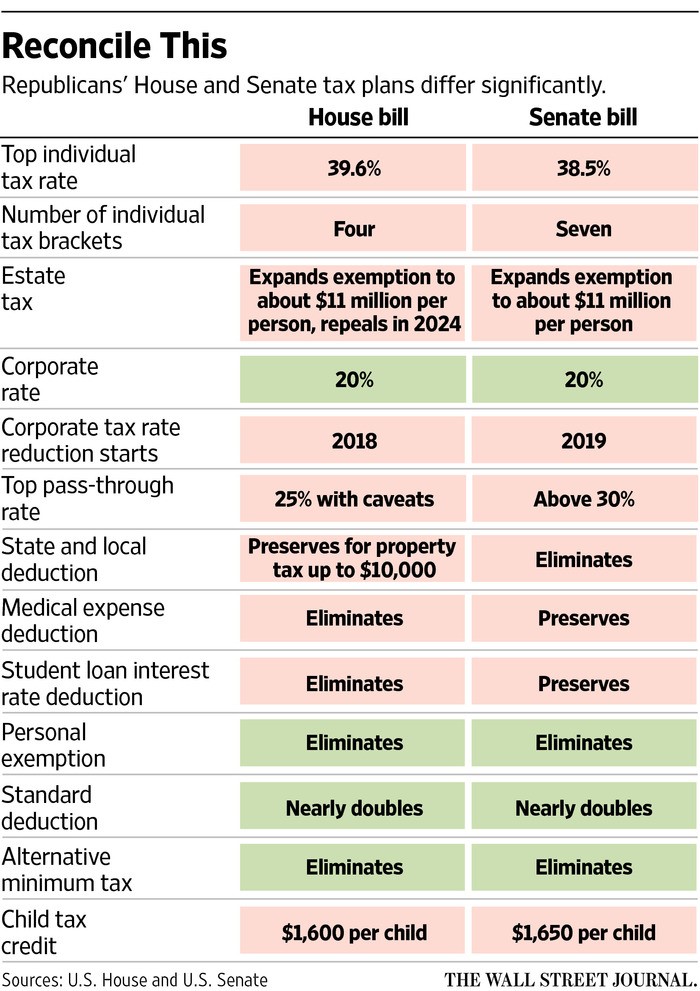 The big differences the WSJ singles out are these:

The big ways the Senate version breaks with the House plan: the level of top individual tax rates, the number of individual tax brackets, the timing of a corporate tax-rate cut and the particulars of estate tax changes[.]

How big are these differences, really?  The top level doesn’t even differ by a per centage point, and the number of brackets only differ in how finely income should be subdivided.  The timing of the corporate tax-rate is a matter of a year, again a small difference: put it in place in 6 months, rather than immediately; cut the rate to 27% this year and 20% next; and on and on—even trading this year vs next for something else.  Estate tax changes differ only in repeal or not—in 6 years, a lifetime in politics, a complete Senate election cycle.

Even the differences the paper elides, keeping or eliminating deductions for SALT, medical expenses, and student loan interest, is tiny.  Most folks don’t itemize, which is the only place these deductions even exist, and with the standard deduction doubled all around (personally, rather than a single/married standard deduction, I’d rather see the standard deduction keyed to the then-current year Federal Poverty Guideline, but that’s a trivial difference at present, too) and lowered personal income tax rates, the value of those deductions shrinks even further, especially for those who still would itemize.

No, the two versions blatantly, firmly, agree on the principles and the degree to which those principles should be satisfied in the tax reform effort underway.  They differ on numbers and timing—all small things that are easily resolved, except to the extent the Republican Snowflake Three in the Senate get in the way and to the extent the My Way of the Highway collection of House members let their egos get in the way.