Below is the handout given to the NLMSM at Wednesday’s White House daily press briefing, this time hosted by Chief Economic Advisor Gary Cohn and Treasury Secretary Steve Mnuchin for the purpose of discussing President Donald Trump’s tax reform proposal, which was released today via that handout and press briefing. 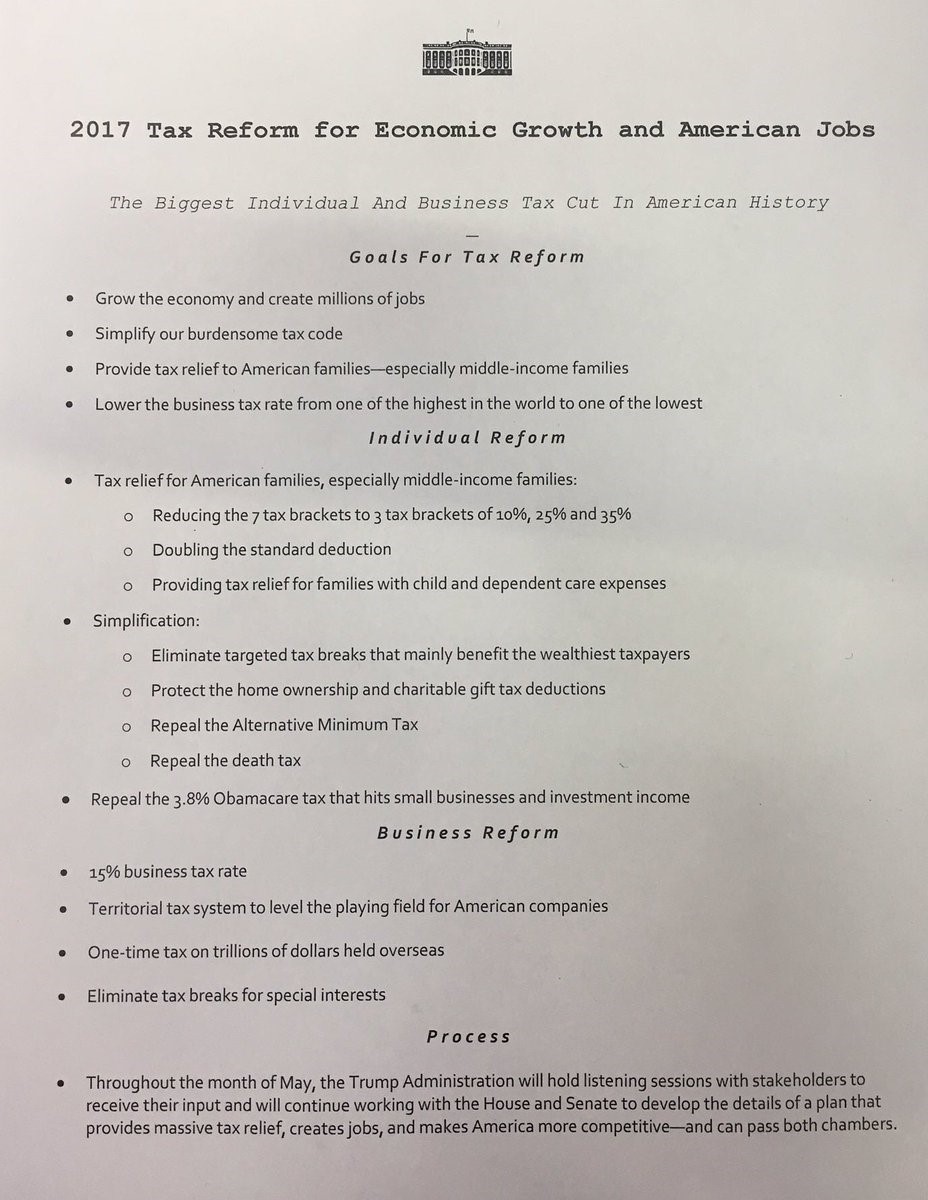 Also included, as mentioned during the briefing though not on the handout, is a proposed reduction of the peak capital gains tax to 20%, which Cohn and Mnuchin said will stimulate investment—and, I add, stimulate both productivity and new job creation via that increased investment.

Then Mnuchin had this to say:

This is about massive reductions in business rates for corporations and for small businesses, and many studies show that 70% of the tax burden falls on American workers.  So, by cutting business taxes, this will increase wages for American workers and create more jobs.

As predicted, this is a major tax reform.  Congress needs to get behind it.  The Trump administration is making a large bet on this (although they and the Republican Congress also are working on the flip side,  reducing spending (not just slowing its rate of growth)) in that, in response to a question during the briefing, Cohn and Mnuchen said that this reform would stimulate sufficient economic growth that the Federal revenue reduction nominally resulting from these tax rate reductions would generally not occur in the realization.

Of course, the Progressive-Democrats in Congress immediately started protesting.

Senator Chuck Schumer of New York, the chamber’s Democratic leader, said the proposal to cut tax rates for pass-through businesses would just benefit high-income people like the president himself.

Never mind that the bulk of American pass-through businesses are mom-and-pop businesses and small- to medium-sized businesses, not the large, wealthy ones.  Never mind that these mom-and-pop and small- to medium-sized businesses produce the bulk of the economic activity in the US.  This is the same objection Congressional Progressive-Democrats have to eliminating the death tax: even though the death tax forces children to sell their parents’ small businesses or farms in order to pay the inheritance tax, that tax is necessary because some rich folks might benefit from its elimination.

And California, and Illinois.  Democrat-controlled states, every one.  Congressional Progressive-Democrats will squall about this, too.

Senate Finance Committee Ranking Member Ron Wyden (D, OR) issued a statement calling it an “unprincipled tax plan that will result in cuts for the one percent, conflicts for the President, crippling debt for America, and crumbs for the working people.”

What the Progressive-Democrats in Congress have yet to offer is any reason why our middle class and poor should be denied this tax code improvement with its attendant increased opportunity to become wealthy themselves just because it might also benefit the wealthy.

What the Progressive-Democrats in Congress have yet to explain is why they insist on singling out particular groups of Americans for punishment via our tax code just because they’ve been more successful than the rest of us.

And, of course, there was ABC News Chief White House Correspondent Jonathan Karl and his permanent question, apparently because he can only hold one concept in his head: “Will the President release his tax returns?”  Never mind that President Donald Trump, and several of his spokesmen have answered this question quite clearly for the last year—both during the campaign and since Trump’s swearing in.