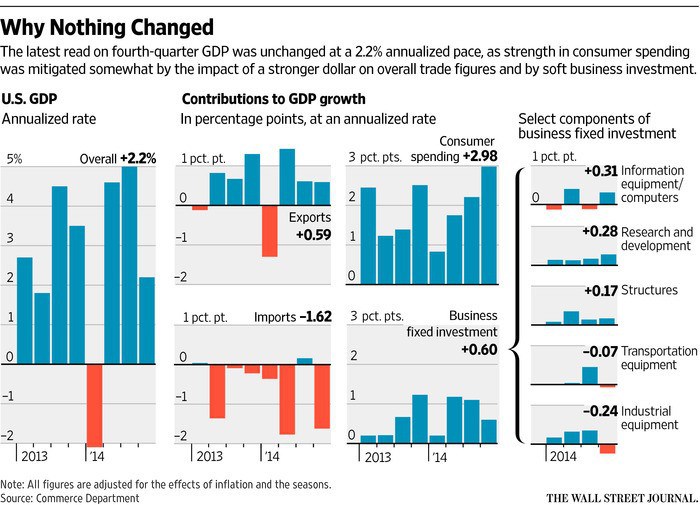 First, the overall GDP: disregard the shrinking in the first quarter of 2014; that appears to be an aberration compared to the nearby trend.

What’s interesting are the components of the GDP growth and of Business Fixed Investment in particular.

Imports remain in negative territory: we’re importing less and less (and possibly at an accelerating rate) over the last couple of years. There are a number of reasons for this, including the increasing competitiveness of domestically produced products on one hand and the continued doldrums of the our economy leaving too little discretionary funds in the hands of consumers and of businesses to buy imported goods on another. An implication of this, though, is that importation is tomorrow’s consumer and business spending.

Consumer spending is up (and possibly at an accelerating rate), but look for that to fall off if imports continue to decrease: many of those imports are for incorporation into business products for consumer purchase; that puts a lag into many of the imports’ impact on consumer spending.

Look at Business Fixed Investment, though. That never has gotten very high, peaking a bit over a year ago at just over a 1% year-on-year increase, and it’s been falling off since. Decreasing imports being used less and less by businesses.

This is especially telling in those BFI components. R&D may be accelerating, but it’s still at a pathetic rate. R&D is critical to business survival: it’s not just about how to market existing product better, though that’s important. It’s primarily developing new product, market research to guide that development, and so on. If a business’ products become obsolete, so does the business.

The tale is told in spades in Structures and Industrial Equipment. Businesses aren’t expanding their physical plant, especially in manufacturing. That means these guys don’t see any future growth in demand, either, and they don’t have the disposable funds in this still-stagnant economy to expand where they do see some glimmers.

It’s going to be a long two years on the domestic front.