John Hinderaker, at Power Line, notes that the Progressives in the Senate have voted down even a modest (some might say trivial) reduction in Federal spending on food stamps—using your tax money.  (Note, by the way, that 100% of the spending on food stamps is by the Feds; no state spends one red cent of state monies on these.)  The offered reductions were in the form of three  amendments, two put forward by Jeff Sessions (R, AL):

The spending mandated by the Farm Bill to which these amendments were to be attached is shockingly weighted, as this graph shows: 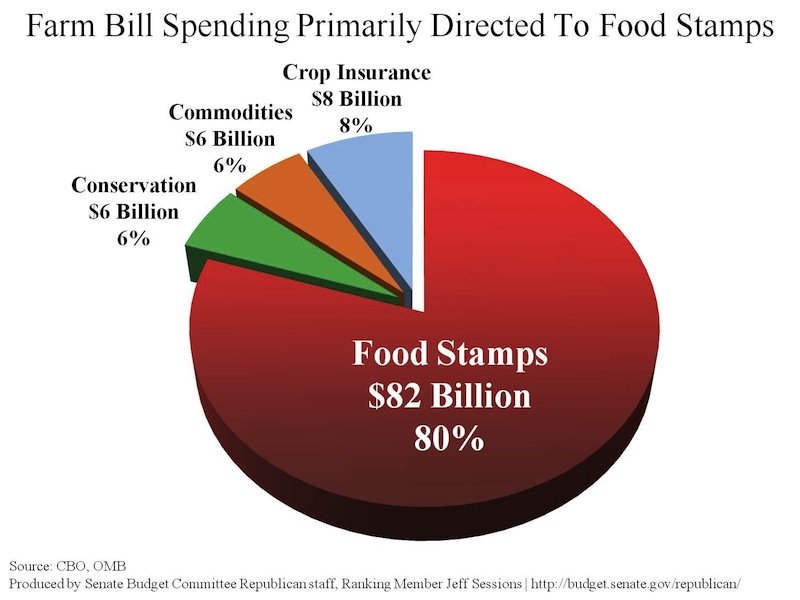 There are a couple of other aspects of this Progressive demand to spend your money on their food stamps.  Forty-six million Americans currently live below the poverty line as a result of President Obama’s failed economic and social welfare policies.  Thirty-nine states have no limits at all on the fiscal well-being of a family in determining that family’s eligibility for food stamps—anyone who applies qualifies—and twenty-eight states have limits that are more than 130% above the Federal Poverty Guideline (which differs in a trivial way from the Federal Poverty Threshold that the Census Bureau uses to determine the number of Americans living in poverty).

Of those 39 states (the full list can be seen in Table 1 of the Congressional Research Service’s “The Supplemental Nutrition Assistance Program: Categorical Eligibility“), California, Illinois, and New York alone account for 70.5 million Americans.

Under Federal law, which the Progressives have refused to alter in any meaningful way, vastly more Americans are eligible for food stamps than are actually living in poverty.  Food stamps no longer are a program to help the needy; they’re a program to get and keep Americans dependent on a Progressive-run government for their welfare.  They’re a Progressive Incumbency Welfare program.