Here it is, in black and white.  First we have Senate Majority Leader harry Reid (D, NV) advising his Republican opposition that they must “leave Tea Party ‘extremism’ behind and ‘learn what legislation is all about.’ ”  Reid goes on to insist that

Legislation is an art of working together, building consensus, compromise. And I hope that the Tea Party doesn’t have the influence in this next year that they had in the previous year[.]

I don’t think…anyone can question or they should question our having reached out to Republicans[.]

Of course, he’s silent on the House-passed budget that he’s refused to let see the Senate floor for debate for more than a year.  And he has nothing to say about any of the 20-something jobs-related House-passed bills that he’s similarly actively blocking.  Who’s refusing to talk?

Then we have this from President Obama:

…recess appointments last week of Richard Cordray at the Consumer Financial Protection Bureau and three new members of the National Labor Relations Board—even though the Senate was not in recess….

The question is a novel one, and the substantial arguments on each side create some litigation risk for such appointments[.]

Obama made the appointments were made, anyway.

Finally, there’s this from one of the Progressives’ party organs:

‘Why Are Obama’s Critics So Dumb?’

together with this image from Newsweek‘s own proud tweet: 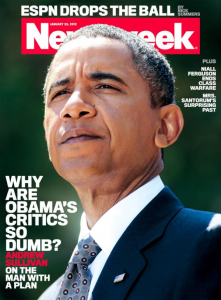 Clearly, the American people are extremists who don’t know they’re supposed to compromise and accept the Progressives’ every wish, and if one side can’t get its way, they’ll just ignore the law and go ahead, anyway.  Oh, and we’re all just dumb, so our views don’t matter, anyway.  Which sort of renders unimportant all us extremists: we don’t know what we’re doing.