Many of you will have heard of the Mojave Desert Memorial Cross fiasco and the 9th Circuit’s weaseling related to that case.  In sum, the ACLU sued to have the cross—a war memorial, erected to honor America’s fallen, our soldiers who’ve died defending our country and our freedoms—removed on the manufactured offense that someone might object to the use of a cross for this purpose.  After the 9th Circuit Court of Appeals ruled on appeal that the cross had to go, the US Supreme Court, in a strongly worded ruling, said the cross was a legitimate war memorial device and was to be permitted to stay; they then returned to case to the original court to produce a proper ruling.  Following this, vandals tore down the cross, and the current status is that the Obama administration will not permit the cross to be re-erected until that original court gets off its duff and follows its instructions from the Supreme Court.

There is a similar memorial near Mt. Soledad, CA, that honors, among others, America’s Korean War fallen; it was created in 1954.  It’s going through the same vicious ordeal. 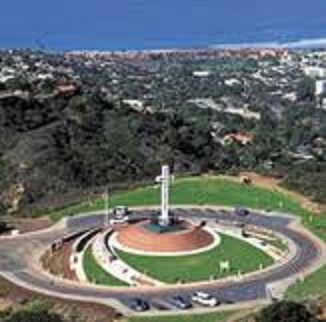 In response to another ACLU suit alleging offense at using a cross to honor our war dead, the 9th Circuit ruled on appeal that the Mt. Soledad cross had to go, also, overruling a lower court Federal judge’s 2008 decision.  The ruling was so poorly reasoned, and so wrong-headedly done, that five judges on the 26-judge court objected to the 9th‘s refusal to rehear the case en banc.  The essence of the judges’ objections to the Court’s refusal involve arcane mechanics of evaluation, but they center on the plain secular nature of the cross in its use and purpose at the Mt Soledad Memorial.  They wrote

[T]he question is what viewers may fairly understand to be the purpose of the display. That inquiry, of necessity, turns upon the context in which the contested object appears.

They then cited the Supreme Court’s ruling in that Mojave Desert case above:

…recognized the unique history of the Cross as a symbol of respect for fallen soldiers (of all faiths or no faith)….

This is what Justice Kennedy had written, that our five judges were citing:

…a Latin cross is not merely a reaffirmation of Christian beliefs.  It is a symbol often used to honor and respect those whose heroic acts, noble contributions, and patient striving help secure an honored place in history for this Nation and its people.  Here, one Latin cross in the desert evokes far more than religion.  It evokes thousands of small crosses in foreign fields marking the graves of Americans who fell in battles, battles whose tragedies are compounded if the fallen are forgotten.

And so it is with the Mt. Soledad cross.

The five judges went on with other arguments, but you get the idea.

As the case now stands, the Mt. Soledad Memorial Association, represented by the Liberty Institute, are appealing to the Supreme Court; the Court will hear a petition for certiorari (lawyer-talk for “agree to take up the matter”—if they grant certiorari, they will hear the appeal itself) in early February.  One hopes the Supremes will take the case and then rule as they did with Mojave; although nothing is certain in legal disputes.  One hopes also that the Supremes will swat the 9th for their continued…intransigence…, but that’s probably too much to ask.

This case is another example in a long-standing assault on our war memorials through judicial activism and by an ACLU that used to serve a valuable role in protecting the rights of individual Americans, but that now seems bent on attacking the rights of other Americans.