Current inflation is running at 5% year-on-year, which is quite high by relatively recent standards, and so is much worried about. But what does that rate mean, really? After all, economic activity came to a near standstill during—and especially at the outset of—the Wuhan Virus situation, which led to a sharp fall-off of both demand and production, which thoroughly contaminated what otherwise would have been useful price information. The on-year part of that comparison is a large aberration. 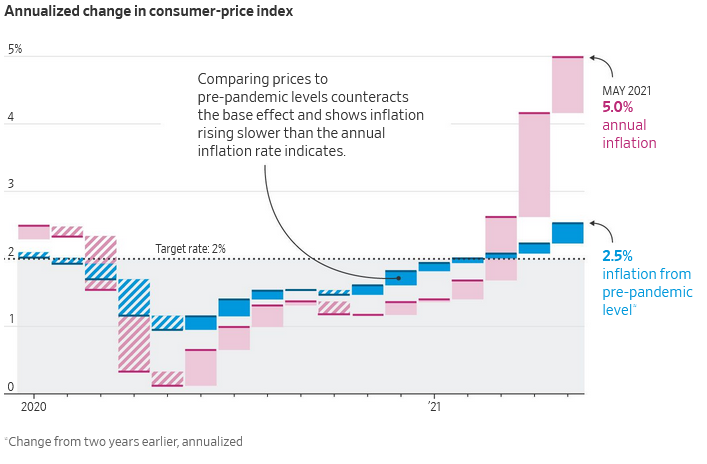 That’s not so bad.

But it doesn’t mean that we should stop worrying about inflation. The past is all we have for predicting the future, but predicting still, as an American philosopher has noted, is hard, especially when it’s about the future.

There are a plethora of things that go into inflation, and three of them are the amount of demand, the amount of stuff with which to supply that demand, and the time-to-time relationship between the two.

Currently, as our economy reopens—or as Americans reopen our economy despite the diktats of Liberal Elites—all that demand, pent up through most of 2020, is sharply returning, and it’s adding to the ordinary levels of demand we Americans have for stuff. The producers are having a hard time ramping back up to satisfy that demand, particularly the pent-up-caused overshoot, and especially producers of hard goods with long chains of supply are having trouble catching up.

Also slowing that supply recovery is the recovery of our labor force. Millions of Americans were thrown out of work during the virus situation, and millions of them are returning to work as we reopen the various aspects of our economy. But millions more—a minority, but a significant enough one to have measurable impact on production recovery—are staying at home, honoring Progressive-Democrats’ wish that they do so by collecting the moneys those Progressive-Democrats are paying them to stay home rather than return to work.

How long will this present burst of apparent inflation last? Will it become inflation worth worrying about as the rate stays high while 2020 recedes into the past?

And you have to ask yourself why Progressive-Democrats want to keep Americans on their welfare payroll.