We consumers have them, and The Wall Street Journal Editorial Board ran one of their own in their Sunday piece. They also published the graph below, depicting consumer inflation expectations for the nearby future, originated by the University of Michigan’s Survey of Consumers. 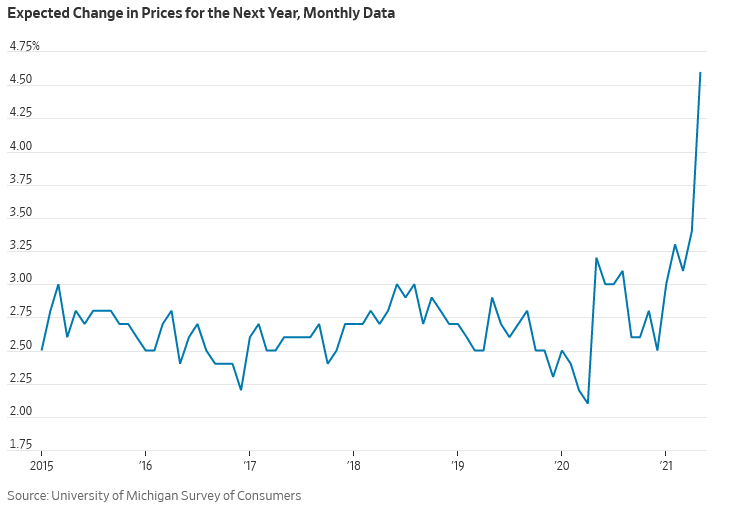 Notice that. Between 2015, when the Obama “recovery” from the Panic of 2008 finally began to take hold, and 2021, when the Biden administration took office and renewed Jerome Powell’s and the rest of the Fed’s management team DOC, consumer inflation expectations remained remarkably steady in the range 2%-3%, just a skosh above the Fed’s currently claimed 2% target inflation rate.

Of course, those six years were in the face of the Fed’s artificial suppression of interest rates. Interest rates are a major driver of inflation.

However, with the Fed insisting on continuing to artificially suppress interest rates, now coupled with the Biden/Pelosi/Schumer-led Progressive-Democrat spending spree—a “checks in the checkbook, money still in the account” binge that makes Obama, and Trump, look like misers—and the resulting Federal deficit and national debt explosion, us consumers are recognizing that the money flood will override the interest rate suppression.

Because, in the end, inflation is always and everywhere a money phenomenon, not an interest rate one.

It’s possible that American consumers aren’t as dumb as our Central Bankers, enclosed in their own Beltway Bubble, make us out to be.