Police forces around the nation are on the verge of getting Artificial Intelligence assistance in identifying folks of interest to them in real time on our cities’ streets.  The image below and its caption illustrate the thing. 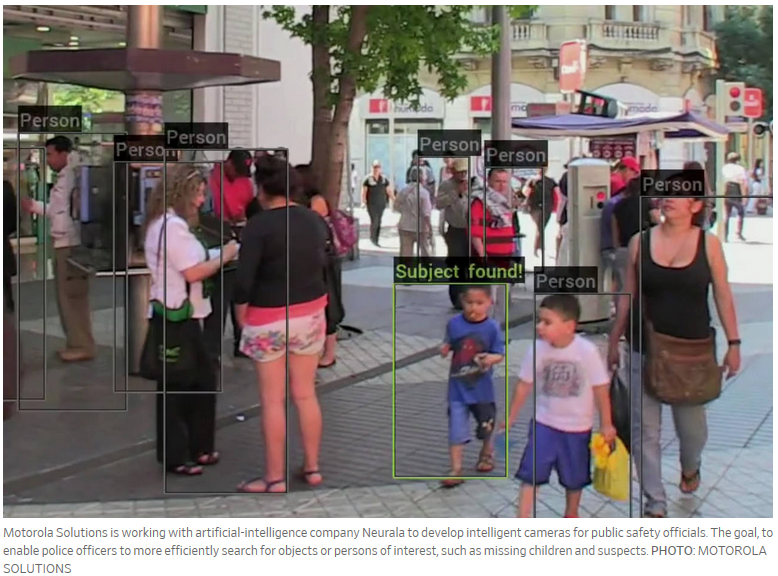 I’m all for assisting the police, especially regarding the subject of that cynically tear-jerking caption.  But this sort of thing needs to be looked at with a very jaundiced eye.  It isn’t too far away from what the People’s Republic of China already is doing in terms of routine surveillance and tracking of everyone.

It’s not that everything the PRC does is bad, but some things are inherently dangerous, no matter who developed them or uses them extensively.  This sort of technology can very easily become a direct assault on our ability to be anonymous in public spaces.

TaeWoo Kim, chief scientist at One Smart Labs, a New York-based startup that is working on such software, said the technology is “creepy and a bit Big Brother-y,” but said it is “purely intended to fight crime, terrorism and track wanted subjects.”

The road to Hell is paved with good intentions. Governments can’t be trusted with such capabilities, and we don’t even need to invoke nefarious intent or “Big Brother-y” conspiracies to see that. Governments will end up misusing, even abusing, this sort of thing just in the ordinary outcome of normal bureaucratic imperatives to justify the bureaucrat’s and his bureaucracy’s existence, to grow, to expand the bureaucracy’s power and budget.

William Bratton, the former commissioner of the NYPD, says that the public was similarly worried about DNA testing when the technology first emerged. The technology has been credited in freeing wrongfully convicted people from prison.

This is a false analogy, though.  DNA testing isn’t used for routine, real-time surveillance of the population or even of small groups or of individuals, and current technology doesn’t allow such use.  AI-based image surveillance technology lends itself to exactly that real-time watching.