Curt Schilling had a thought on the matter, and the Left via ESPN, its stand-in on this case, took action consistent with its policy toward those impertinent enough to disagree with its holy writ: ESPN sacked Schilling. 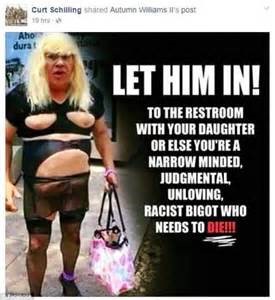 but still, he was right on the facts:

…DNA and those pesky X and Y chromosomes.  In short, in this fight between science and authority, Mr Schilling is in the amusing position of being the Galileo, with ESPN filling in for the Holy Office.

But wait—it’s what people think of themselves, how they identify, in’t it?  Not so much.

Paul McHugh, former psychiatrist in chief for Johns Hopkins Hospital, puts it this way: “Curt Schilling is of course correct with the science in saying that claiming to be a woman when you have the chromosomal and anatomical structures of a man does not make you such.  You’re still a man no matter what you think or how you dress.”

Special snowflakes are just riding the wind in the trees.