The Fed has been actively suppressing interest rates, keeping them near zero, for a long time. This is in addition to the Obama administration’s economic policies, and the two attitudes have combined to produce an economic recovery from the Panic of 2008 that is one in name only. See this graph, adapted from one in a recent Wall Street Journal to see just how bad the current “recovery” is. The numbers other than the two first quarter 2015 are average annualized rates of increase. 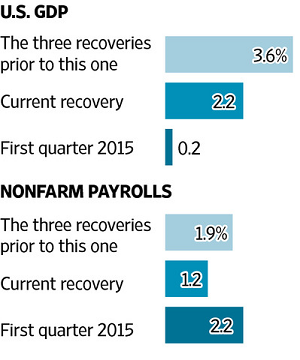 Certainly, the Obama policies need to be corrected, but here’s something the Fed can do all by itself: it could let interest rates float, and see them rise to market rates, probably with a temporary overshoot, given the duration of its suppression and separate money printing, but that’s only going to get worse as the Fed delays correcting its own error.

With interest at their more normal level, banks would be more willing to lend, and without lowering their credit standards; businesses would be more willing to borrow, since even though they’d be paying more for their debt, they’d recognize the positive economic indicator; and folks dependent on fixed income sources for their living—widows and orphans—would have more money to spend, even if only on necessities, which would help make that positive economic indicator more concrete.